TEHRAN, December 16 -Austria's conservatives and the far-right have agreed to form a coalition government with anti-immigration policies and restrictive plans against the EU role on top of its agenda. 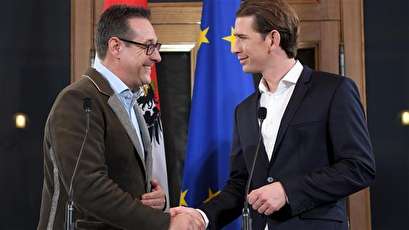 TEHRAN, Young Journalists Club (YJC) -Austria's conservatives and the far-right have agreed to form a coalition government with anti-immigration policies and restrictive plans against the EU role on top of its agenda.

"We are happy that we have reached this agreement. Tomorrow (Saturday) we will inform the president about our programme and our team," Kurz told reporters in Vienna.

"Voters gave us a clear mandate to take into account their concerns, particularly when it comes to their security," FPOe chief Heinz-Christian Strache told the same news conference.
Kurz is currently the foreign minister of the outgoing government of "grand coalition" between OeVP and the center-left Social Democrats (SPOe).

The OeVP came first in the October 15 elections with 31.5 percent, making Kurz, 31, the next Austrian chancellor and also the world's youngest leader.

The key campaign promises of both the OeVP and the FPOe were cutting benefits for all foreigners, slashing bureaucracy and restricting the EU's influence on national affairs.

Anti-fascist demonstrators shout slogans in Vienna on November 9, 2017, to protest against a possible entry of the far-right Freedom Party into the government. (AFP photo)
The last time the FPOe entered government in 2000, Austria was briefly ostracized within the EU.

Observers have expressed concern over the FPOe's future control over all Austrian intelligence services as the party is notorious for its extremely restrictive refugee policy.

Several different groups, including the anti-fascist "Offensive Against the Right", plan to stage protests in Vienna on Monday.

Despite the FPOe's anti-EU stance, Kurz said on Thursday that the "pro-European" position of the incoming government "has been secured."

The two parties have reportedly agreed on cutting tax and other salary charges and loosening labor laws.

The coalition is expected to announce its plans Saturday and the government will be sworn in next week.