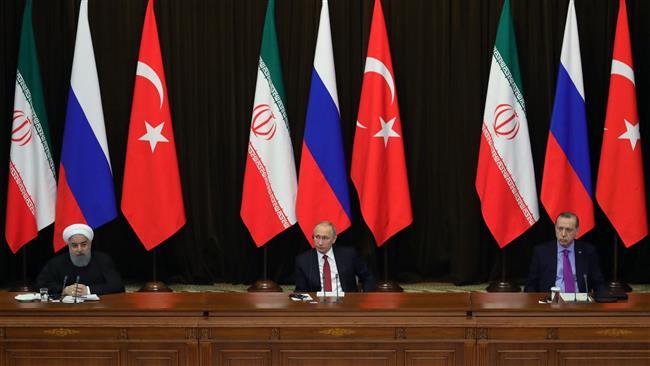 TEHRAN, Young Journalists Club (YJC) - In an address to Russia’s Federation Council, the upper house of the parliament, on Friday, Lavrov hailed the intra-Syrian peace talks in the Kazakh capital, Astana, as a successful example of cooperation between Russia, Iran and Turkey to resolve the Syria conflict.

“As the president [of Russia Vladimir Putin] has stated many times, our (the three states’) goals and interests do not fully coincide,...our countries have different approaches to various aspects of the Syria issue, [but] we stand together when it comes to the need to defeat terrorism, preserve Syria’s territorial integrity and harmonize relations between all of its ethnic and religious groups,” he said.

“These common interests ensure consistent and effective activities on the Astana platform,” the top Russian said, referring to the intra-Syrian peace process underway in the Kazakh capital with the mediation of Russia, Iran and Turkey.

So far, seven rounds of the Astana talks have brought representatives from Syria’s warring sides to the negotiating table in a bid to end the foreign-backed militancy in the Arab country, which broke out in March 2011.

Iran and Russia are allies of the Syrian government, while Turkey supports several anti-Damascus armed groups.

The fourth round of the Astana discussions in May resulted in an agreement on four de-escalation zones across Syria, which have sharply reduced fighting in the conflict zones.

The top Russian diplomat, however, did not elaborate on whether it was necessary to set up a permanent trilateral group on Syria, stressing that instead of “bureaucratic” bodies, there should be “flexible coalitions.”

“On the whole, current global problems are of such a nature that fixed bureaucratic bodies are not needed. Instead of them, flexible coalitions, which allow us to react to modern challenges in a quick and effective way, are needed,” he said.

Lavrov further emphasized that he was is sure that the last remnants of the Daesh terrorist groups will be defeated completely in Syria.

In late November, the presidents of Iran, Russia and Turkey, which are acting as the guarantors of the Syria ceasefire, met in the Black Sea resort city of Sochi.

They reaffirmed their strong commitment to Syria’s sovereignty, independence and unity and agreed to hold the Syrian National Dialogue Congress in Sochi aimed at bringing together the opposite factions in Syria for peace talks.

Share to
Related News
No new ‘Iron Curtain’ between Russia and US – Lavrov
Russia's Lavrov calls on U.S. and North Korea to start talks: RIA
Brains over bucks: Putin hints AI may be key to Russia beating US in defense despite budget gap
Russian lower house ratifies deal to expand naval base in Syria’s Tartus
Trump to Putin: US was glad to save many lives in Russia by helping foil major terrorist attack
Tags
Russia ، Iran ، Turkey ، Lavrov ، terrorism ، Syria ، protection
Your Comment