TEHRAN, December 17 - Female employees of the US-based Fox News network are mulling to reveal a new wave of sexual misconduct cases following dismissal of earlier such incidents as “nonsense” by the network’s owner and acting CEO Rupert Murdoch. 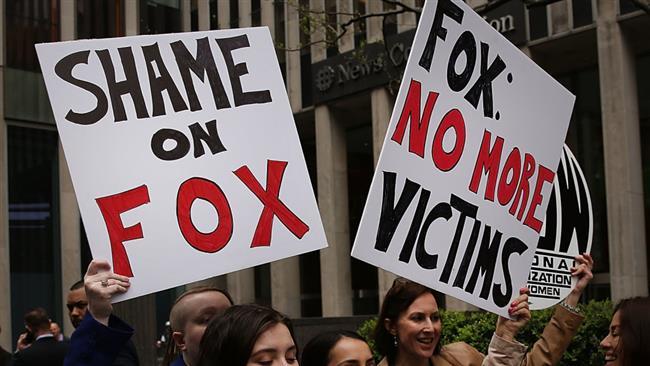 TEHRAN, Young Journalists Club (YJC) - Several Fox News staffers said they are considering to make public their own stories of being subjected to sexual abuse at the major US news network out of disgust and anger toward the recent remarks made by Murdoch, who also owes numerous media outlets across the US, Britain and Australia, Huffington Post reported Friday.

“I have had to put up with a hostile work environment for years, and now I’m told that it doesn’t exist by a man who doesn’t have to walk these halls every day? I’m hungry for justice,” said one Fox staffer as quoted in the report.

"Hey Rupert - stop with the lies or we’ll go public with the truth. All of it. Including about the talent and executives you still employ who have harassed us and don’t give a damn about workplace respect - only money,” said another woman who was a former staff member. “How much will it take before you actually start caring about your female employees? Is your 52 billion enough? Are we really going to clean house now?”

Such remarks by current and former Fox staff members come after Murdoch dismissed allegations against former CEO Roger Ailes as "isolated incidents" in an interview with Sky News.

“All nonsense, there was a problem with our chief executive [Ailes], sort of, over the years, isolated incidents,” Murdoch said. “As soon as we investigated it, he was out of the place in hours, well, three or four days. And there’s been nothing else since then."

"That was largely political because we’re conservative," Murdoch claimed. "Now of course the liberals are going down the drain — NBC is in deep trouble. CBS, their stars. I mean there are really bad cases and people should be moved aside. There are other things which probably amount to a bit of flirting.”

According to the report, the remarks by Murdoch have enraged many at the network, some of whom are considering legal action now.

Following the publication of the Huffington Post report, Fox issued a statement on Friday, denying Murdoch was referring to the sexual harassment claims when he used the word "nonsense."

“Rupert never characterized the sexual harassment matters at FOX News as ‘nonsense,’ ” the spokesman said. “Rather, he responded negatively to the suggestion that sexual harassment issues were an obstacle to the company’s bid for the rest of Sky.”