Thousands rally in Tel Aviv to call for Netanyahu's resignation

TEHRAN, December 17 - Several thousand Israelis have taken to the streets of Tel Aviv to call for the resignation and imprisonment of Prime Minister Benjamin Netanyahu over his corruption charges. 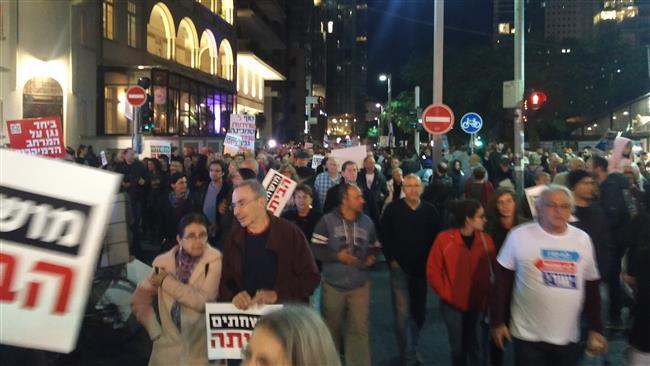 “Netanyahu to jail,” chanted the protesters, urging the Israeli premier to leave office and to stand trial over repeated allegations of graft while in office.

Netanyahu is involved in two separate corruption cases and investigators have questioned him several times.

The cases involve allegations that Netanyahu received lavish gifts from wealthy businessmen and negotiated a deal with a newspaper owner for more favorable coverage. He has denied any wrongdoing.

One of the ongoing investigations against him, reportedly related to the gifts, is carried out under “caution,” meaning that Netanyahu is suspected of committing a crime.

Judges have acquitted Netanyahu of charges that he had sought personal interest in a multi-billion dollar military deal with a German company to procure modern submarines.

The Saturday protest was the third “March of Shame” against Netanyahu in less than a month. Some 30,000 people attended the first demonstration in Tel Aviv two weeks ago, calling for Netanyahu to be jailed.

Similar protests were held Saturday in other cities across Israel, including in Haifa, Rosh Pina and Afula.

The protests come amid widespread public anger over a parliamentary bill which would bar police from publicizing recommendations on indictments. Many say the bill is specially devised to protect Netanyahu.

The premier has reportedly asked Israeli lawmakers to prepare a new draft of the bill that could not apply to the ongoing investigations against him.