TEHRAN, December 18 -Battle lines were drawn on Monday for South Africa’s ANC as voting began to elect a new leader to succeed President Jacob Zuma as head of a party that has ruled since the end of apartheid but faced scandals and corruption allegations. 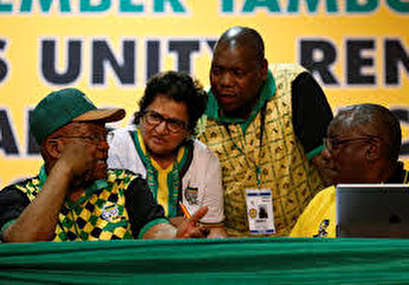 TEHRAN, Young Journalists Club (YJC) -Battle lines were drawn on Monday for South Africa’s ANC as voting began to elect a new leader to succeed President Jacob Zuma as head of a party that has ruled since the end of apartheid but faced scandals and corruption allegations.

The vote is perhaps the most pivotal moment for the ANC since it launched black-majority rule under Nelson Mandela’s leadership 23 years ago. With scandal and graft accusations having tainted Zuma’s presidency, the party is deeply divided.

Whoever emerges at the helm of the African National Congress, a 105-year-old liberation movement that dominates Africa’s most industrialized economy, is likely to become the country’s next president after elections in 2019.

A total of 4,776 delegates began casting their ballots in the early hours of Monday, the ANC said, to select between Deputy President Cyril Ramaphosa and Zuma’s preferred candidate, his ex-wife and former cabinet minister Nkosazana Dlamini-Zuma.

“Delegates are very exhausted,” an ANC source, who is a voting delegate, told Reuters. “I don’t know how they will run today’s sessions.”

Ramaphosa and Dlamini-Zuma were the only candidates nominated for the ANC leadership at a conference in Johannesburg on Sunday night.

In a boost to Ramaphosa, courts ruled that officials from some provinces seen as supporting Dlamini-Zuma had been elected illegally and were barred from the conference.

The rand currency gained after that news on Friday, extending its gains to more than 2 percent on Sunday..

“The rand is stronger on the likelihood of Cyril Ramaphosa being elected ANC head,” said Brett Birkenstock, a director at Overberg Asset Management. “The markets favour Ramaphosa and expect him to improve the economy.”

A winner had been expected to be announced on Sunday, but long delays led to the vote being pushed back repeatedly. It was not clear when the outcome would be announced.

On Saturday, Zuma announced plans to raise subsidies for tertiary colleges and universities, a move analysts said was timed to appeal to the party’s more populist members allied to Dlamini-Zuma, the first woman nominated as an ANC presidential candidate.

Zuma has faced allegations of corruption since he became head of state in 2009 but has denied any wrongdoing.

Ramaphosa, a former trade union leader who became a businessman and is now one of the richest people in South Africa, has vowed to fight corruption and revitalize the economy, a message hailed by foreign investors.

Dlamini-Zuma pledged during her campaign to tackle the racial inequality that has persisted since the end of white-minority rule.

Ramaphosa drew the majority of nominations from party branches scattered across the country. But the complexity of the leadership race makes it uncertain he will win the final count.

“The race is extremely close,” said Susan Booysen, a political analyst at the University of Witwatersrand’s School of Governance in Johannesburg.

“Before today we said Dlamini-Zuma could emerge as a winner. Even if there is a strong lead in terms of branch nominations by the Ramaphosa camp, it’s not clear-cut.”