TEHRAN, December 18 -Calming winds on Sunday helped firefighters slow the spread of a California wildfire that already ranks as the third largest in state history, having scorched 270,000 acres (109,000 hectares) along the scenic Pacific Coast north of Los Angeles. 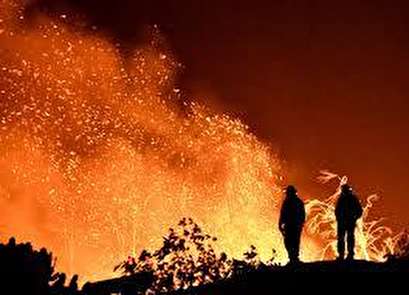 Officials said more than 8,500 firefighters were battling the so-called Thomas Fire in Southern California, which began on

Dec. 4. It has destroyed more than 1,000 structures and threatened 18,000 others, including homes in the wealthy town of Montecito just outside the coastal city of Santa Barbara.

The blaze, centered less than 100 miles (160 km) northwest of downtown Los Angeles, has forced more than 104,000 people to evacuate or seek shelter, turning neighborhoods into ghost towns and filled the air with smoke.

Communities near Santa Barbara saw a break from the gusting winds that had stoked the fire and helped it spread, opening a window for authorities to contain the disaster with favorable conditions expected at the start of the week.

Officials called Sunday one of their most productive days so far in battling the blaze during a late-day news conference.

The fire is now 45 percent contained. Firefighters were employing more than 970 fire engines and 34 helicopters to battle the blaze.

Bakersfield Fire Department Captain Tim Ortiz described the fire as “like nothing I’ve ever been involved with before” with “winds enough to almost push you over.”

“We’re just hoping to make it home for Christmas,” he said at a recreation center in Santa Barbara serving as a staging area and base camp for more than 3,000 firefighters.

Larry Dennis, 60, sought refuge at a shelter on Sunday after the blaze inundated the region with smoke and turned nearby hillsides red.

“I’ve seen people who have lost everything,” he said.

Charlotte Garcia, 25, had been at the shelter for almost a week after the fire burned down her house in Ojai, about 30 miles (48 km) north of Ventura. She lamented that firefighters had not done more to stop the destruction.

“The house next door to us got burnt down too, because they were too busy on the hill,” she said.