Iran to file complaint at UN over US missile claim, pieces will have to be handed over to Iran for inspection

TEHRAN, December 18 -Iran will soon be filing a complaint with the United Nations over a recent move by the United States to claim that missile debris allegedly retrieved in Saudi Arabia is of Iranian origin, says the Iranian defense minister. 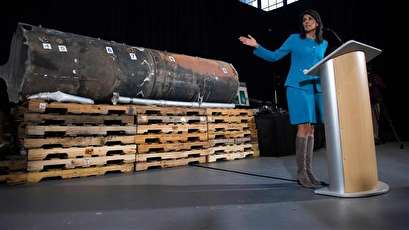 TEHRAN, Young Journalists Club (YJC) -Iran will soon be filing a complaint with the United Nations over a recent move by the United States to claim that missile debris allegedly retrieved in Saudi Arabia is of Iranian origin, says the Iranian defense minister.

On Thursday, US Ambassador to the UN Nikki Haley appeared in a staged show in front of a large, charred tube that she claimed was "concrete evidence" that Iran was providing missiles to Yemen.

A Saudi Arabian-led coalition launched a war against Yemen in 2015 and has ever since been indiscriminately hitting targets in the country. Yemeni Houthi fighters have been firing missiles in retaliatory attacks against Saudi targets every now and then.

One such missile targeted a Riyadh airport on November 5. Following an apparently off-the-cuff remark by US President Donald Trump, who said that in his "opinion," the missile had been an Iranian "shot," Saudi officials scrambled to blame Iran.

Tehran soon rejected those accusations and said the so-called "evidence" presented by Haley was "fabricated." The Houthis, too, said the missiles are domestically built.

Iran's Defense Minister Brigadier General Amir Hatami said on Monday that Iranian military technicians were investigating the US administration's allegations and were preparing a complaint to be filed with the UN.

"The enemies of the Islamic Republic can make whatever claim, but once the [Iranian] complaint is filed, a part of the missiles [presented] will have to be handed over to Iran so we can present a final conclusion after inspections," Brigadier General Hatami said.
"One cannot respond to this allegation without an inspection and from afar; therefore, the Islamic Republic's complaint will soon be prepared and forwarded to the UN," he said.
Iranian Foreign Minister Mohammad Javad Zarif has already called the purported missile parts showcased by Haley as "alternative facts" and "alternative evidence," in a reference to and play on a widely-discredited phrase coined by Trump’s adviser Kellyanne Conway.

US daily The New York Times has also pointed out that the "evidence [presented by Haley]... fell short of proving her claims."