US president can’t cause Iran deal to collapse: President Rouhani

TEHRAN, December 19 - Iranian President Hassan Rouhani says the United States will not be able to kill the 2015 multinational nuclear deal, emphasizing that the landmark pact will remain in place. 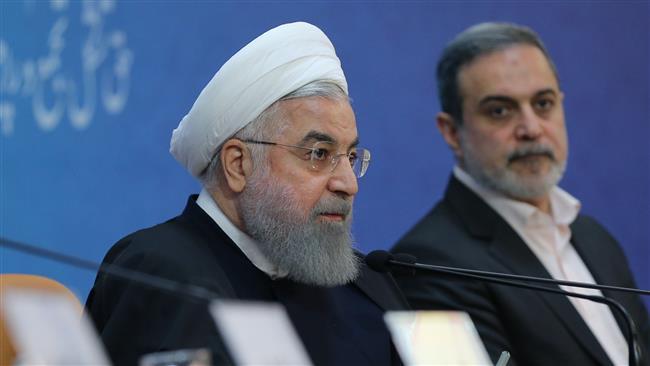 TEHRAN, Young Journalists Club (YJC) - “Two years have passed since the [implementation] of the JCPOA,” Rouhani said on Tuesday, referring to the Joint Comprehensive Plan of Action, as the nuclear accord is officially called.

“The Americans have made several attempts to destroy the JCPOA, but they have failed to this day, and I believe that they will not be able to do so until the end,” he added.

The Iranian president also urged the opponents of the Iran nuclear deal not to pin hopes on Trump, saying “he would do nothing for you.”

“The JCPOA remains in place, and we will continue on this path,” Rouhani pointed out.

The JCPOA was reached between Iran and the P5+1 countries — namely the US, Russia, China, France, Britain, and Germany — in July 2015 and took effect in January 2016.

Under the agreement, Iran undertook to apply certain limits to its nuclear program in exchange for the termination of all nuclear-related sanctions against Tehran.

The International Atomic Energy Agency has repeatedly confirmed Iran’s full commitment to its side of the bargain.

However, Trump refused in October to certify that Iran was complying with the JCPOA under a domestic US law and warned that he might ultimately “terminate” the deal.

He also directed his administration “to work closely with Congress and our allies to address the deal’s many serious flaws.”

Last week, the US Congress missed a deadline to reimpose sanctions on Iran that were lifted under the JCPOA.

Now, Trump has until mid-January to decide whether to waive the anti-Iran sanctions or risk terminating the nuclear pact by imposing new measures.

Other signatories have, however, firmly defended the accord, saying it is working well and requires no amendment. They also called on Washington to stay committed to the international document.

Share to
Related News
Trump to extend Iran sanctions waivers, impose new bans: Officials
Iran urges global action against US bids to undermine nuclear deal
Iran’s Salehi says IAEA only reference on verifying Iran’s compliance with nuclear deal
Iran to file complaint at UN over US missile claim, pieces will have to be handed over to Iran for inspection
Tags
Iran ، Rouhani ، nuclear deal
Your Comment