TEHRAN, December 20 -A new opinion poll shows that US President Donald Trump’s approval rating has sunk to a historic low just less than a year into his term in office. 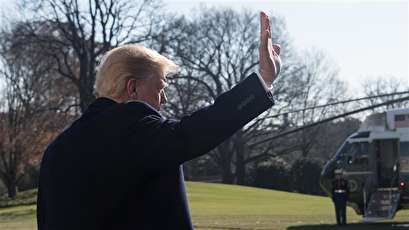 TEHRAN, Young Journalists Club (YJC) -A new opinion poll shows that US President Donald Trump’s approval rating has sunk to a historic low just less than a year into his term in office.

The poll conducted and released by the CNN on Tuesday showed that only 35 percent of Americans approved of the way Trump was handling his job as president, with 59 percent saying they strongly disapproved.

Trump is the only US leader since former President Dwight Eisenhower – from 1953 to 1961 – who has ever had an approval rating lower than 49 percent in December of the first year in office.

The CNN poll on Tuesday was conducted among 1,001 adults nationwide via landlines and cell phones from December 14 to 17 with a plus or minus 3.8 percentage points margin of error.

Last month, thousands of protesters marched in over 20 cities across the United States to denounce the policies of Trump and his administration.

The organizers of the protest, a group known as Refuse Fascism, vowed to continue the protests “day and night” in nearly two dozen cities until their demand is met, which is the removal of Trump's “regime.”

Demonstrators from the Refuse Fascism movement march during a protest calling for the end of the administration of US President Donald Trump and Vice President Mike Pence in Los Angeles, California, on November 4, 2017. (Photo by AFP)
In a separate opinion poll on the same day, the Gallup survey found that Hillary Clinton, Trump’s Democratic rival in the 2016 presidential election, also suffered a new low in favorability rating with 36 percent of support. Sixty-one percent of respondents rated her unfavorable.

The poll marked a five-point decline in the former secretary of state's favorability rating since June, when a poll of national adults showed 41 percent describing her as favorable.

The Gallup’s rating falls below Clinton's previous low of 38 percent in August to September of last year.

Trump stunned the world on November 8, 2016 by defeating Clinton, sending the United States on a new and uncertain path.

Clinton had been leading Trump throughout the campaign in most of the polls except for the last week of the election when she lost ground to Trump.

In her recent interviews, Clinton has admitted that she is not entirely done with the election and still wonders why she lost to Trump.

This photo taken on November 7, 2016 shows Democratic presidential nominee Hillary Clinton speaking during a rally outside the University of Pittsburgh's Cathedral of Learning in Pittsburgh, Pennsylvania. (Photo by AFP)
Clinton has, on numerous occasions, blamed Russia for losing the election to Trump, claiming that Moscow had colluded with her rival. The allegations, however, have been repeatedly denied by both Trump and Russia.

The recent low numbers for the former US Democratic presidential candidate come amid increased scrutiny on past accusations of sexual misconduct against her husband, Bill Clinton. New York Democratic Senator Kirsten Gillibrand said in an interview last month that Bill Clinton should have resigned as president over his affair with then-White House intern Monica Lewinsky.