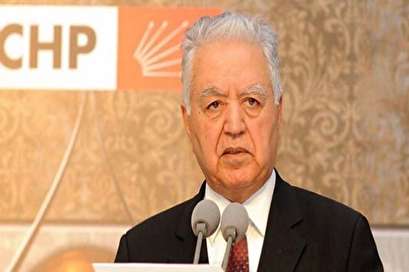 Recently US President Trump recognized Jerusalem as capital of Israel, a move that created lots of reactions through the region, Muslim and non-Muslim nations. And last night US vetoed the resolution by UNSC on the city.

To shed more light on the issue and the real reasons behind Trump’s move, the reasons behind his decision and the role of some regional countries in this regard was discussed with senior member of Turkey’s Republican People's Party (CHP), Dr. Osman Faruk logoglu.

Here is the full text of the interview:

What are the reasons behind Trump's decision?

President Trump took this unfortunate step for reasons related to both domestic politics and foreign policy considerations.  First, this was a campaign promise.  He thus aims to solidify the support of the Jewish lobby and of the Jewish caucus in the Congress.  He also wants to divert attention from his troubles at home, especially from the probe into Russian meddling in the 2016 elections. Trump probably calculated that the reactions form the region, especially from Saudi Arabia and Egypt would be meek and he was actually right.  The US President aims to isolate Iran by forming a Saudi-led Sunni alliance in the region with the addition of Israel. Trump’s ultimate target is Iran.  The issue of Jerusalem is just a way-station in Trump’s strategy against Iran.

Washington has announced that it will move its embassy from Tel Aviv to Jerusalem in 3 years. Is there any election motives behind this move by Trump aiming next presidential election?

The only electoral motive for Trump could be to bolster the Jewish lobby support behind him.  But his Jerusalem decision is likely to backfire in the medium term, do more harm than good to Israel and might therefore cost him votes, Jewish and others, at home.  Despite different timelines on the subject, relocation of the US Embassy to Jerusalem is probably not in the works for the time being, given the international reaction to Trump’s misstep.

Saudi Arabia, Emirate and Egypt presence in the OIC meeting in Istanbul was in a very low level. It is said these three countries don't have any problem with Trump's decision on Jerusalem. Do you think so? Is yes why they agree with trump decision?

These countries have always been reticent in their support to the Palestinian cause.  On Jerusalem, they all pay lip-service to its special status.  But there is no bite in their stance.  I think their eyes and hearts are more focused on Washington than on Jerusalem because they feel they need continued American support for both domestic and regional considerations.

Jordan didn't attend in a meeting initiated by Egypt in Cairo participated by Saudi Arabia and Emirate. Why?

I am not sure what meeting you are referring to.  In any case, Jordan stands to be the most affected country by the course of the Middle East peace process. Home to the largest number of Palestinian refugees, Jordan treads a delicate line, a middle of the road approach on the question of Palestine.  Amman also needs American support, has relations with Israel, but holds a principled position on the question of Jerusalem.  That is why King Abdullah attended the Islamic Cooperation Organization extraordinary summit in Istanbul convened by the current chair President Erdoğan of Turkey.

Considering all recent developments, can the US be an impartial mediator for peace talks between Palestinians and Israel and even a good ally for country like Turkey as very clearly the US has been supporting many terrorist groups in the region that some of them like PKK are direct threat to Ankar's security?

I believe with the recognition of Jerusalem as the capital of Israel, Washington has lost a lot of credibility as an honest broker in the Palestinian-Israeli conflict.  But this might be temporary if the transactional President Trump now turns to Israel and says, “look, I gave you what you wanted most – Jerusalem.  Now you give me something in return – agree to a peace deal with the Palestinians!” Remember that President Trump instructed his administration to prepare a strategy for peace on the Palestinian issue.  If he moves in this direction, he might emerge as a winner.  As for Jerusalem, he made clear that US recognition of it as Israel’s capital does not preempt the final status of the city in the context of a peace agreement between the Palestinians and Israelis.

In the meantime, the idea of going to the UN General Assembly under UNGA Resolution 377A, the Uniting for Peace Resolution, is a good idea if well prepared and planned.  This Resolution enables the international community to act in cases where the UN Security Council fails to take action.  This is precisely the case now after the UNSC vote where the US just vetoed the draft on Jerusalem prepared by Palestine, calling on the UNSC to rescind the US recognition.

President Erdogan has threatened to cut ties with Israel, how serious this threat is?

The threat is genuine but highly unlikely to be put into effect.  In the past Turkey lowered the level of its diplomatic relations with Israel, but never cut ties.  Turkey even closed its Consulate General in east Jerusalem in 1980 after Israel declared Jerusalem its capital, but reopened it after the Madrid Peace Conference.  Severing diplomatic ties is hardly ever a good idea because one needs the diplomatic channel most especially in times of crises.