TEHRAN, December 20-A group commanded by a rogue former police officer in Venezuela has attacked a military barracks near the capital of Caracas, stealing a small amount of weapons. 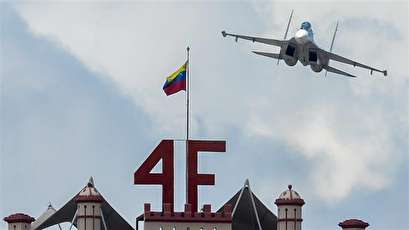 TEHRAN, Young Journalists Club (YJC) -A group commanded by a rogue former police officer in Venezuela has attacked a military barracks near the capital of Caracas, stealing a small amount of weapons.

Venezuelan President Nicolas Maduro said on Tuesday that the group, which he called “terrorists,” had broken into a National Guard barracks near Caracas.

Oscar Perez, a rogue Venezuelan former police pilot, who previously attacked the parliament building in the capital, claimed responsibility for the theft of the weapons from the military post in what he called “Operation Genesis.”

The Venezuelan president vowed to fend off what he called a coup attempt after a “terrorist” attack on key government buildings in the capital, Caracas.

The Venezuelan government has issued an Interpol alert demanding the arrest of Perez over the “terrorist attack.”

“Behind all these attacks is the government of the United States,” Maduro emphasized in remarks carried by the state media, adding that it had been “organized from [the southeast US city of] Miami,” where some of his political opponents have chosen to live.

“Wherever they appear, I’ve told the armed forces: Fire at the terrorist groups!” he said, referring to the group commanded by Perez.

While Venezuela has experienced political and economic crisis for months now, the brazen Tuesday attack may be a sign that the political tussle in the country is moving to a new, armed chapter.

Maduro tacitly referred to but also ruled out that prospect in his Tuesday remarks.

“Do these people think they can attack a unit of the armed forces to steal some guns and threaten democracy and that that’s going to be tolerated? Zero tolerance!” he said.

The Venezuelan president has repeatedly condemned Washington for the political and economic crisis in his country, underlining that the US intends to strangle the Latin American nation with sanctions.