TEHRAN, December 20 - Syria's president stressed during the meeting with the head of the International Federation of Red Cross and Red Crescent Societies (IFRC) that the humanitarian crisis in the country has intensified due to economic issues and the terrorist war. 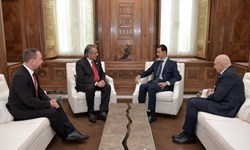 Assad stressed that the economic blockade of the Syrian people along with the terrorist war has exacerbated the humanitarian crisis in Syria.

Syria’s President said that the government with all of its organizations keeps doing anything reducing the civilian’s pain and suffering which are caused by terrorist groups’ brutalities.

Assad then pointed out to the increase of international collaboration with ICRC as one of the measures taken in that regard.

It is the first time the head of IFRC travels to Syria.