South Korea ready to delay joint US drills to de-escalate with North: Moon

TEHRAN, December 20 - South Korean President Moon Jae-in says he is ready to postpone joint military drills with the United States in order to reduce tensions with North Korea, provided that the North "stops its provocations." 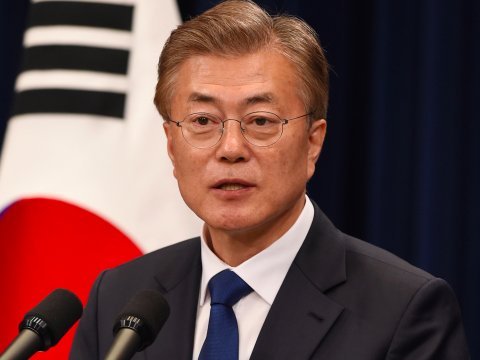 "It is possible for South Korea and the US to review the possibility of postponing the exercises,” Moon said in an interview with the US broadcaster NBC," he said.

“I have made such a suggestion to the US and the US is currently reviewing it. However, all this depends on how North Korea behaves,” the president added.

Washington and Seoul have held a series of high-profile war games near the Korean Peninsula over the past months, amid an ongoing standoff over Pyongyang's development of ballistic missiles and nuclear warheads.

While North Korean leaders have denounced the joint military activity, which sometimes also involves Japan, as rehearsals for an invasion, but the US and the South insist that the practices are is defensive in nature.

Tensions between the two sides peaked earlier this month, when the US and its allies launched large-scale joint aerial drills in the Pacific, which involved more than 230 aircraft took part, including six F-22 Raptor stealth fighters.

The most recent exercise, dubbed the “Warrior Strike,” saw American and South Korean troops practice infiltrating North Korea and removing the country's nuclear weapons in the event of war, according to South Korea news agency Yonhap.

The war games were said to be a response to the North's test-firing of what US military experts said was an all-new Hwasong-15 missile capable of hitting targets across the US mainland.

Despite the South's apparent push for de-escalation, the US seems to be adopting more aggressive policies against the North.

The administration of US President Donald Trump, which is seeking to slap more UN sanctions on Pyongyang, is now working with the UN Security Council to blacklist a number of ships that have reportedly circumvented the bans, according to Reuters.