TEHRAN, December 21 - A senior member of the Palestine Liberation Organization (PLO) says UN members states will not be intimidated by the US threat to take action against the countries that vote against its policy shift on Jerusalem al-Quds in an upcoming General Assembly meeting. 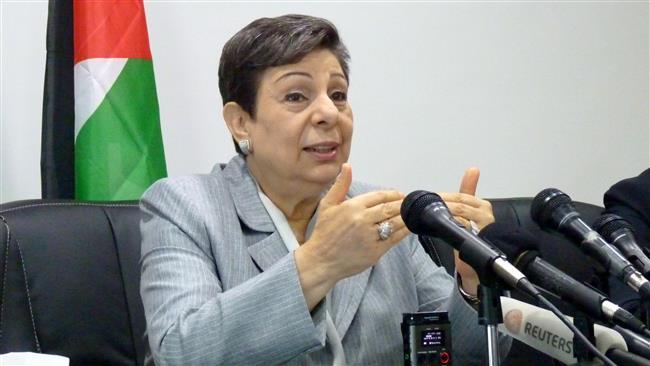 TEHRAN, Young Journalists Club (YJC) - The 193-nation assembly is set to hold an emergency special meeting later on Thursday to vote on a non-binding resolution on US President Donald Trump’s recent decision to recognize Jerusalem al-Quds as Israel’s “capital,” days after Washington used its veto power to block a similar motion at the UN Security Council.

Speaking at a cabinet meeting on Wednesday, Trump threatened to cut off financial aid to the countries that back the General Assembly resolution.

Also in a letter to dozens of UN states on Tuesday, US Ambassador to the UN Nikki Haley warned that Washington would remember those who voted for the resolution criticizing Trump's decision on Jerusalem al-Quds.

She also echoed the warning in a Twitter post, saying, the US will be “taking names” of the countries that support the resolution.

Hanan Ashrawi, a member of the PLO’s Executive Committee, condemned the US president’s warning to aid recipients as “blackmail and extortion.”

"Trump should know that there are things that are not for sale or subject to blackmail, particularly issues of principle, legality and morality. Extortion is the most effective way for the US to isolate itself even further and to weaken its influence and standing globally,” she said on Thursday.

“We will not be deterred or intimidated. The overwhelming majority of the UN General Assembly members will honor their own legal and political obligations on Palestine," she added.

"I am calling on the whole world: never sell your democratic will in return for petty dollars," he said in a televised speech in Ankara.

He further stressed that the US president "cannot buy with dollars" Turkey's support for Jerusalem al-Quds.

"I hope and expect the United States won't get the result it expects from there (the UN) and the world will give a very good lesson to the United States," Erdogan noted.
Yildirim slams US veto

Turkish Prime Minister Binali Yildirim criticized US veto of the UN Security Council resolution, which affirmed that any decisions on the status of Jerusalem were "null and void and must be rescinded."

The 14 other council members, including four European Union countries, backed the motion.

"America, at the UN Security Council, was left alone beside the 14 members of Security Council and as a last resort came to a point where it threatens those who voted against America," Yildirim said.

He also called on Trump to show common sense, saying all nations enjoyed their own "sovereignty" and had the "right to make their own choices".

Irked by the upcoming UN vote, Israeli Prime Minister Benjamin Netanyahu described the world body as a "house of lies."

"Israel totally rejects this vote, even before (the resolution's) approval," he pointed out.
Bahrain sides with US

While anger boils in the Arab and Muslim world over Trump's decision, Bahraini Foreign Minister Khalid bin Ahmed Al Khalifah claimed that Jerusalem al-Quds is "a side issue."

In a Twitter post on Wednesday, he claimed, “It’s not helpful to pick a fight with the USA over side issues while we together fight the clear and present danger" of Iran.

On December 6, Trump declared that Washington was recognizing Jerusalem al-Quds as the “capital” of Israel and that he had instructed his administration to begin the process of moving the American embassy from Tel Aviv to the holy city.

Share to
Related News
Turkey will 'retaliate' if US halts weapon sales over purchase of Russian arms – Ankara
US makes large contributions to UN, expects to be respected – Haley to UNGA
US, Israel scramble to block UN General Assembly resolution on Quds
Thousands of Americans protest Jerusalem decision in Washington
Tags
US ، UN ، jerusalem ، palestine
Your Comment