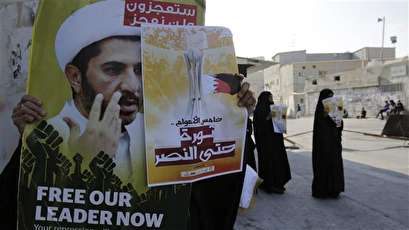 “Amnesty International has today expressed serious concern about recent developments in Bahrain,” the right organization said in a statement on Thursday.

The UK-based rights body listed some instances of Manama’s violations of international human rights law, including the new charges against the head of the dissolved al-Wefaq National Islamic Society, Sheikh Ali Salman, the dissolution of the National Democratic Action Society (Wa’ad), the trials of civilians at military courts and the ongoing trial of human rights activist Nabeel Rajab.

The report noted that it requested clarification from Bahraini authorities about the mentioned cases through a letter on November 21, but the Manama regime has not provided any response yet.

“A constitutional amendment ratified by the King on April 3 paved way for military trials of civilians and which could be used to try any critic deemed to be a threat to Bahrain’s national security or its ‘independence, sovereignty or integrity,’” the statement said.

“Amnesty International believes that these trials are part of the ongoing campaign by the Bahraini authorities to silence dissenting and critical voices, including those abroad,” it added.

The rights body further urged the regime in Bahrain to immediately and unconditionally release Sheikh Salman and Rajab along with all prisoners of conscience, stressing that all charges against them should be dropped and their sentences quashed.

“The organization calls for civilians tried by the High Military Court to be transferred for trial to a competent ordinary court. In addition, it calls on the authorities to rescind the decisions to dissolve political parties,” the statement said.