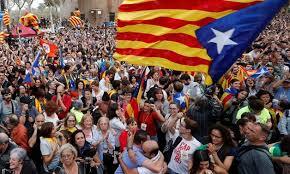 TEHRAN, Young Journalists Club (YJC) - Spanish markets recoiled at a surprise result that is also a setback for the European Union, which must now brace for more secessionist noise as it grapples with the disruption of Brexit and simmering east European discontent.

By risking an election in the wealthy region, Rajoy appears to have made the same mistake that leaders such as Greece's Alexis Tsipras, Britain's David Cameron and Italy's Matteo Renzi have made in recent years: betting that voters would resolve their troublesome domestic conundrums for them.

With the count from Thursday's Catalan parliament election almost complete, separatist parties had secured a slim majority, sending stocks down around 1 percent on fears that tensions with its richest region will hurt the euro zone's fourth-largest economy.

Catalonia accounts for a fifth of Spain's economy. More than 3,100 firms have shifted their headquarters out of the region since the independence drive boiled up this year into a referendum that Madrid declared unconstitutional.

"More companies leaving, less economic activity there - and worse for everyone," said the chief executive of a major listed Spanish company, speaking on condition of anonymity because of the tense climate of the independence debate.

Rajoy, who called the election after sacking the previous, secessionist government, had still not made a comment, some 12 hours after the outcome became clear. He is due to make a statement at 1300 GMT.