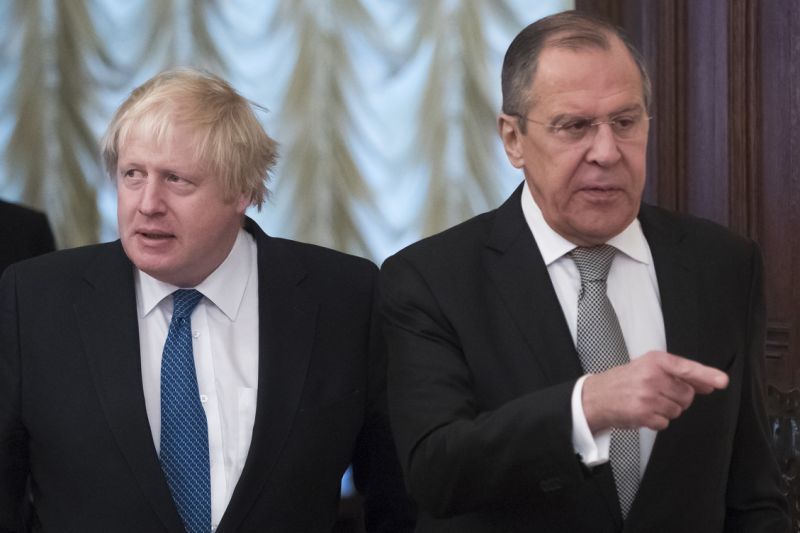 TEHRAN, Young Journalists Club (YJC) - While Johnson and Russian Foreign Minister Sergey Lavrov bickered at a joint news conference over allegations that Russia meddled in Britain's vote to leave the European Union, the two top diplomats expressed a desire to work together when national interests align.

Johnson is the U.K.'s first foreign secretary to visit Moscow in more than five years.

Russia and Britain have collided on a range of issues, including the 2006 poisoning death in London of ex-Russian spy Alexander Litvinenko and the Ukrainian crisis.

"It's important to talk about these things and to be frank about them and to accept that they are obstructions in our relationship at the moment," Johnson said at the start of his talks with Lavrov. "But we mustn't let ourselves be defined by these problems."

Their news conference gave the two diplomats an opportunity to spar briefly over the allegations that Russia was interested in seeing Britain leave the EU. Lavrov said Johnson has acknowledged that there was no proof of Russian interference in the June 2016 vote.

"Not successfully, I think is the word," Johnson immediately intervened.

Lavrov retorted that his British counterpart needed to publicly argue with him to safeguard his reputation at home.

"Sergei, it's your reputation I'm worried about," Johnson said as Lavrov laughed. "You should recognize that Russian attempts to interfere ... haven't been successful."

Unwilling to yield ground, Lavrov snapped: "Lack of action can never lead to any result," adding that Moscow was waiting to see Britain's proof of Russian meddling.

Lavrov acknowledged that relations between the two countries are at a "very low point."

He emphasized that while British and other Western officials like to publicly air their grievances about Russia, Russia would prefer to "discuss mutual concerns face-to-face, not through microphones."

Johnson emphasized that the two nations need to cooperate on international crises, such as preserving the Iran nuclear deal, addressing the threat posed by North Korea's nuclear and missile programs, and helping bring peace to Syria.

"We both have a duty to our countries and to the world to work together for peace and security," he said.

Important areas of cooperation also include security preparations for next summer's World Cup in Russia.

Thousands of British soccer fans are expected to travel to Russia, and Britain is already working with Russia to help ensure their safety.

"I know that we are already cooperating with you, our police forces are working together with you in the run-up to the football World Cup, and we look forward to making sure that fans from the U.K. enjoy their time here in Russia," Johnson said.

Relations between Russia and the West have arguably sunk to their worst since the Cold War over Moscow's 2014 annexation of Ukraine's Crimean Peninsula and its support for pro-Russia separatist rebels in eastern Ukraine. Allegations of Russian election-meddling have worsened the strain.

"While I look at the difficulties in our relationship, whether it's over Ukraine, or over the Western Balkans or what's going on in cyberspace, I agree with you that it's important to talk about these things and to be frank about them," Johnson said.