TEHRAN, December 22 - In a statement at the conclusion of the 8th round of Syria peace talks in Astana, Iran, Russia, and Turkey reaffirmed commitment to the sovereignty and territorial integrity of Syria, and welcomed progress in implementation of a deal on de-escalation areas in the Arab country. 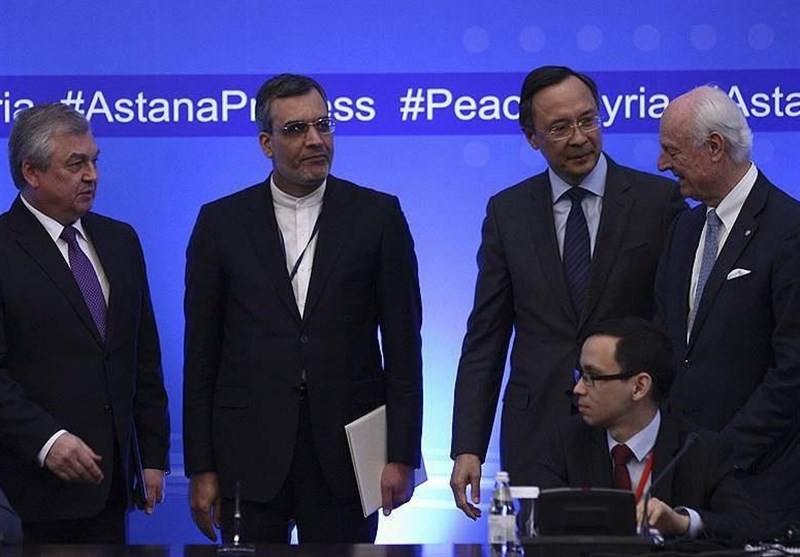 TEHRAN, Young Journalists Club (YJC) - Delegations from Iran, Russia and Turkey - the guarantors of the observance of a ceasefire regime in Syria - concluded two days of diplomatic talks in the Kazakh capital of Astana on Friday.

In a joint statement following the talks, Tehran, Moscow and Ankara reaffirm their determination to continue cooperation in order to ultimately eliminate all terrorist groups in Syria.

They also reaffirmed their commitment to the independence and territorial integrity of Syria.

Following is the full text of the statement:

Joint statement by Iran, Russia and Turkey on the International Meeting on Syria in Astana; 21-22 December 2017

The Islamic Republic of Iran, the Russian Federation and the Republic of Turkey as guarantors of the observance of the ceasefire regime in the Syrian Arab Republic:

- reaffirming their strong and continued commitment to the sovereignty, independence, unity and territorial integrity of the Syrian Arab Republic;

- welcoming progress in the implementation of the Memorandum on the creation of the de-escalation areas in the Syrian Arab Republic of 4 May 2017;

1. Welcome the achievements made in the fight against terrorism in Syria, particularly the defeat of ISIL and imminent liberation of all the Syrian territory from ISIL;

2. Reaffirm their determination to continue cooperation in order to ultimately eliminate DAESH/ISIL, Nusra Front and other terrorist entities as designated by the UN Security Council and to prevent the relocation of international terrorists to other countries and regions;

3. Express joint determination to continue coordinated efforts to ensure that the progress in reduction of violence is irreversible. They underscore the necessity to take urgent and active international steps in order to assist the Syrians in restoring unity of the country, and achieving a political solution of the crisis in accordance with the provisions of UNSC resolution 2254 (2015) through an inclusive, free, fair and transparent Syrian-led and Syrian-owned process leading to a constitution enjoying the support of the Syrian people and free and fair elections with the participation of all eligible Syrians under appropriate UN supervision;

4. Reaffirm their determination to closely interact on a regular basis to support preparation for and convening of the Syrian national dialogue congress in Sochi on 29-30 January 2018 with the participation of all segments of the Syrian society and call on the representatives of the Government of the Syrian Arab Republic and the opposition that are committed to the sovereignty, independence, unity, territorial integrity and non-fractional character of Syria to actively cooperate. To this end three guarantors will hold a special preparation meeting in Sochi before the congress, on 19-20 January 2018;

5. Emphasize that they view the upcoming Syrian national dialogue congress as an initiative aimed at giving momentum to negotiation process under the UN auspices in Geneva and facilitating an intra-Syrian agreement based on mutual consent;

6. Adopt, with a view to building confidence between the conflicting parties in Syria, the “Regulation on the Working Group on the release of detainees/abductees and handover of the bodies as well as the identification of missing persons” and the “Joint statement on humanitarian mine action in Syria including the UNESCO list of cultural heritage sites”;

7. Reaffirm their determination to continue implementing the provisions of the Memorandum of 4 May 2017 and other decisions adopted earlier within the framework of the Astana process;

8. Emphasize the need to continue efforts aimed at strengthening the ceasefire regime and ensuring the effective functioning of all four de-escalation areas;

9. Express their sincere gratitude to the President of the Republic of Kazakhstan, His Excellency Nursultan Nazarbayev and the Kazakh authorities for hosting in Astana the 8th high-level International Meeting on Syria;

10. Decide to hold the next high-level International Meeting on Syria in Astana in the second half of February 2018.