TEHRAN, December 23 -President Donald Trump says the United States has “foolishly spent $7 trillion in the Middle East,” stressing it was time to work “in a bipartisan fashion” instead to "rebuild our country." 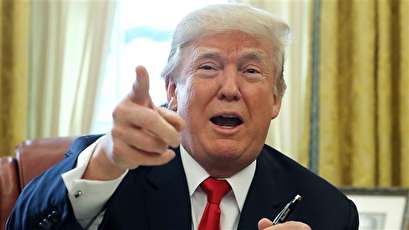 TEHRAN, Young Journalists Club (YJC) -President Donald Trump says the United States has “foolishly spent $7 trillion in the Middle East,” stressing it was time to work “in a bipartisan fashion” instead to "rebuild our country."

“At some point, and for the good of the country, I predict we will start working with the Democrats in a Bipartisan fashion,” Trump tweeted Friday. “Infrastructure would be a perfect place to start.”

The tweet came a day after Trump suffered a defeat at the United Nations General Assembly, which overwhelmingly voted in favor of a resolution calling on the US to withdraw its recognition of Jerusalem al-Quds as Israeli "capital."

Trump had threatened before the vote that Washington would cut foreign aid to countries that voted against his decision at the General Assembly.

US Ambassador to the UN Nikki Haley had echoed the sentiment ahead of the vote, saying the US would “remember” the nations that voted “yes” at the General Assembly.

Haley noted that the US was the “single largest contributor” to the world body but the latest anti-Israeli measure could alter that.

Defying the threats, the UN voted 128-9 to make Trump’s decision “null and void.” Thirty five countries abstained and 21 were no-shows.

Trump appears to be turning the snub into an opportunity at home by stressing the need to spend more on America’s aging infrastructure.

He is expected to unveil his much-awaited 70-page infrastructure proposal next month, relying on a mix of federal, local and private spending.

“The train accident that just occurred in DuPont, WA shows more than ever why our soon to be submitted infrastructure plan must be approved quickly,” he tweeted after the accident.

“Seven trillion dollars spent in the Middle East while our roads, bridges, tunnels, railways (and more) crumble! Not for long!”

During the 2016 presidential campaign, Trump had promised to deliver a $1 trillion infrastructure plan to improve rebuild roads, bridges, airports and other public works in the country.