TEHRAN, December 23 - Four giant new container vessels will join Iran’s shipping fleet next year, bringing the country closer to its target of scraping out a place among the world’s 10 mega shippers. 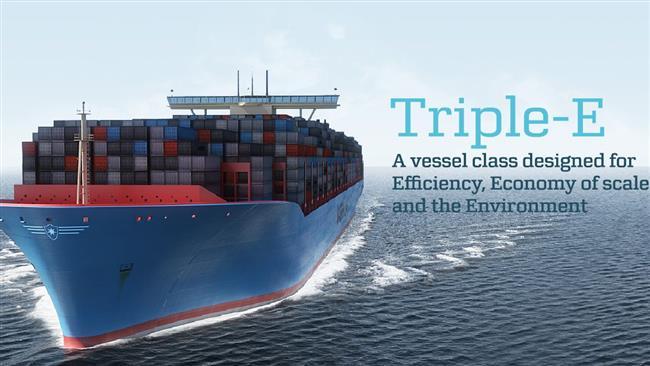 TEHRAN, Young Journalists Club (YJC) - “With the arrival of these vessels, the rank of the national shipping fleet in the work will rise to 16 from 20 at present,” chairman of the Islamic Republic of Iran Shipping (IRISL) Mohammad Saeedi was quoted Saturday as saying.

The report by the Fars news agency did not specify the type of the vessels but they are most likely Triple E ships which Iran has already ordered as part of a plan to expand its shipping fleet.

Triple Es are very large container ships of more than 18,000 TEU. Saeedi said the new ships will help Iran’s container capacity expand 50% and the first of the four vessels will be delivered in the Persian month of Farvardin which begins on March 21, 2018.

“With these vessels, the capacity of Iran’s shipping fleet will increase to 150,000 TEU,” he added.

IRISL is Iran’s largest operator with a fleet of 158 container vessels, dry bulk carriers and tankers. According to Saeedi, Iran currently has 41 container ships of up to 14,000 TEU, but it wants to join the big league and Triple Es are a priority.

The country also owns the world’s largest fleet of oil supertankers consisting of 42 VLCCs, each able to carry 2 million barrels of oil.

Iran’s shipping was among the first sectors hit by a US-led sanctions regime which barred its liners from calling at US and European ports but since the dismantling of that regime, the country has been working to extend its forward coverage to all corners of the world.

Once it has built up a sufficient capacity, IRISL plans to forge an alliance with the world’s top 15 container operators which control the busiest lanes by sharing vessels, networks and port calls, the official has said.

Under a five-year development plan, Iran seeks to turn IRISL to one of the top 10 largest shipping companies. Saeedi said the country is tapping both domestic and foreign capabilities to achieve that goal.

The official said in October 2015 that IRISL was in talks with Chinese banks for loan assistance, conditional on the construction of the new vessels in China's shipyards.