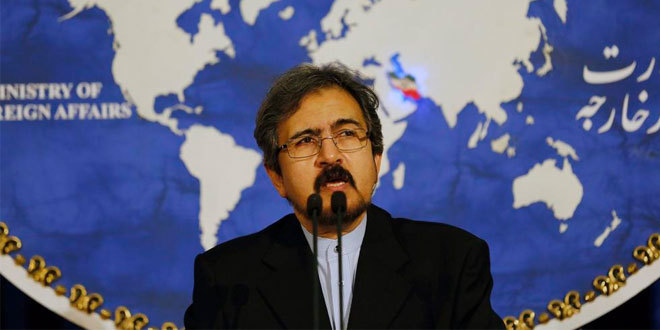 TEHRAN, Young Journalists Club (YJC) - The Bahraini diplomat, Sheikh Khalid Bin Ahmed Al-Khalifa, had played down concerns about the US president’s controversial decision to recognize the Palestinian city of al-Quds (Jerusalem) as the capital of Israel, saying, “It’s not helpful to pick a fight with the USA over side issues while we together fight the clear and present danger of The Theo-Fascist Islamic republic.”

In reply, Bahram Qassemi said the Bahraini foreign minister is too petty to have comment on Iran which is the cradle of ancient and glorious history and civilization.

Qassemi said the ancient land of Iran with a genuine and cultured people is home to a very unique history, culture, civilisation, and democracy, and is one of the most independent countries in the region.

The Iranian spokesman added that the Islamic Republic of Iran is the nightmare of the failed rulers of Bahrain and other reactionary states, who only suppress the majority of (their own) people, and commit crimes against the people with the support of other trans-regional countries.