Turkey wants to bring wounded from Syria's Ghouta for treatment

TEHRAN, December 24 - Turkey is working with Russia to evacuate around 500 people from the besieged Damascus suburb of eastern Ghouta, Turkish President Tayyip Erdogan said on Sunday. 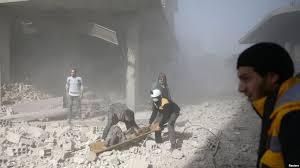 TEHRAN, Young Journalists Club (YJC) - “There are around 500 people, including 170 children and women who need urgent humanitarian aid,” Erdogan said ahead of his departure on an official visit to Sudan.

He said he had discussed the issue with Russian counterpart Vladimir Putin. Ankara aimed to bring people in need of assistance to Turkey to provide treatment and care.

The Russian and Turkish chiefs of staff would discuss the steps to be taken in operations that would also involve the Turkish Red Crescent and Turkey’s Disaster and Emergency Organization (AFAD), Erdogan said.

In November, the U.N. humanitarian adviser for Syria called the situation in eastern Ghouta a humanitarian emergency.