Christmas celebrations marked by messages of peace for conflict-ridden world

TEHRAN, December 25 -Millions of Christians across the globe are celebrating Catholic Christmas. Even in war-ravaged countries calm has briefly reigned over chaos, sending a message of peace for the entire world. 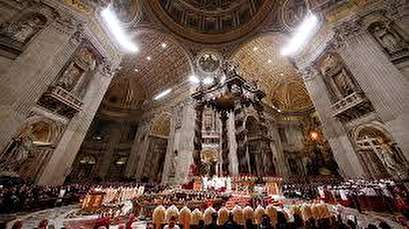 TEHRAN, Young Journalists Club (YJC) -Millions of Christians across the globe are celebrating Catholic Christmas. Even in war-ravaged countries calm has briefly reigned over chaos, sending a message of peace for the entire world.

Catholics around the world watched Pope Francis lead late evening Christmas Mass at St. Peter’s Basilica in the heart of the Vatican. Addressing the faithful, Francis recalled how the birth of Jesus become a “source of hope” in the world. Reciting the story of Mary and Joseph, and Jesus’ birth in Bethlehem, “where there was no place for them,” Francis drew parallels to the struggles of modern day refugees.

“So many other footsteps are hidden in the footsteps of Joseph and Mary,” the Pope said. “We see the tracks of entire families forced to set out in our own day. We see the tracks of millions of persons who do not choose to go away, but, driven from their land, leave behind their dear ones.”

The leader of the Catholic world said God is present in “the unwelcome visitor, often unrecognizable, who walks through our cities and our neighborhoods, who travel on our buses and knocks on our door.”

“Christmas is a time for turning the power of fear into the power of charity, into power for a new imagination of charity, a charity that does not grow accustomed to injustice,” Pope Francis added.

The pontiff's message of peace and hope was palpable on Christmas Eve at Saint Paul’s Church in Mosul, Iraq, which paid a heavy price for its liberation by the US-led coalition from Islamic State (IS, formerly ISIS) terrorists. Amid the widespread destruction, church bells could be heard ascending the ruins of the city as chimes from Saint Paul’s Church resonated deep hope that peace can finally get a foothold in Iraq, a country that has been plunged into chaos for over a decade.

IS terrorists used the church in Mosul as one of their prisons. The building was severely damaged during the battle for the city, but locals volunteered to rebuild it, installing bells as a symbol of peace and as a triumph over the black Islamist flag. Both Christians and Muslims attended a special service marking the birth of Jesus.