TEHRAN, December 24 - The administration of US President Donald Trump says it has negotiated a major $285 million cut in the United Nation’s 2018-2019 budget. 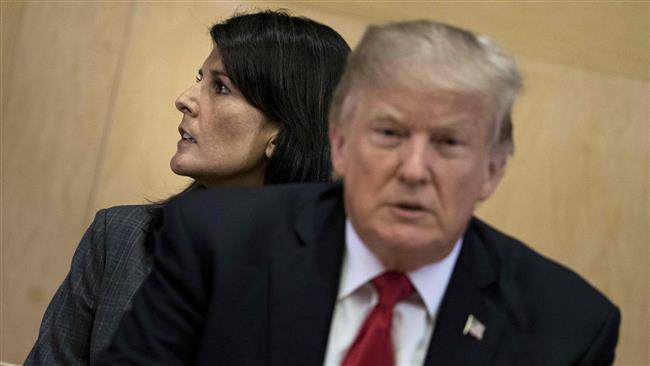 TEHRAN, Young Journalists Club (YJC) - The US mission at the UN said in a statement on Sunday that the “significant cost savings” would better suit Washington’s priorities across the globe.

“In addition to these significant cost savings, we reduced the UN’s bloated management and support functions, bolstered support for key US priorities throughout the world, and instilled more discipline and accountability throughout the UN system,” the statement read.

The UN General Assembly had agreed on a $5.4 billion operating budget for 2016 and 2017. This was separate from the world body's budget for peacekeeping missions, which went as high as $7.8 billion in 2017 alone.

The US currently provides about 22 percent of the annual budget—around $3.3 billion per year. The Trump administration has been seeking to reduce Washington’s stake in the budget.

US Ambassador to the UN Nikki Haley said that the budget cut was a “big step in the right direction” for Washington. The former South Carolina governor said she will continue to explore “ways to increase the UN’s efficiency while protecting our interests."

“The inefficiency and overspending of the United Nations are well known,” Haley said. “We will no longer let the generosity of the American people be taken advantage of or remain unchecked. This historic reduction in spending – in addition to many other moves toward a more efficient and accountable UN – is a big step in the right direction.”

The US Republicans have long been calling on the UN to be more supportive of American policies. The criticism was amplified days ago, after the global body overwhelmingly voted in support of a resolution that opposed Trump’s controversial move in recognizing Jerusalem al-Quds as the "capital" of Israel.

Ahead of the vote, Trump threatened to cut foreign aid to nations who supported the UN resolution. Haley even warned that the US would be “taking names.”

The 193-nation assembly went ahead and adopted the resolution in a decisive 128 to 9 vote, with 35 abstentions.