TEHRAN, December 25 - Iran has called on China and Pakistan to join a counter-terrorism campaign which it is spearheading jointly with Russia and Turkey, saying the coalition is an alternative to the one led by the US which has caused a "security mess". 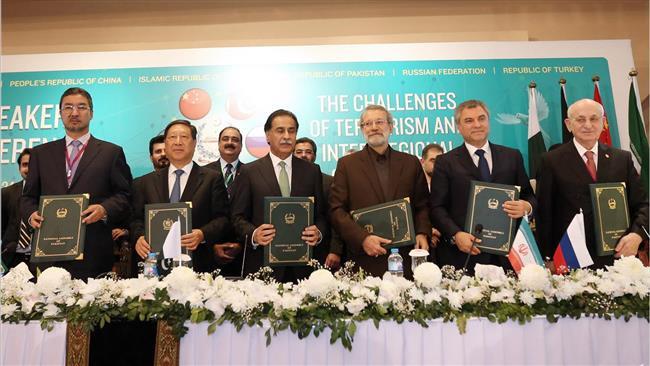 TEHRAN, Young Journalists Club (YJC) - Parliament Speaker Ali Larijani made the appeal during a two-day conference on terrorism, which began in Islamabad Sunday with the participation of his counterparts from Pakistan, Russia, China, Turkey and Afghanistan.

"We need to strengthen alliances like the one between Iran, Russia and Turkey, because these meetings can play a role in this regard, and if China and Pakistan also help us in this matter, we will certainly succeed," he said.

Larijani said the US-led coalition was supposed to eliminate terrorism in Afghanistan and stem the production and smuggling of narcotics, but it has not made any headway in either field.

On the contrary, "the fight that Iran, Russia and Turkey have had in Syria has been successful given the blows which it has dealt to Daesh," the speaker added.

Larijani mocked President Donald Trump's claims that the US and its allies "crushed ... (Daesh) terrorists on the battlefields of Syria and Iraq, and will continue pursuing them until they are destroyed.”

"You were the ones who created Daesh. How are you now claiming to fight terrorism? This is a funny claim," he said, referring to Trump's remarks while unveiling US National Security Strategy earlier this month.

The American strategy in the region has led to a "security mess", Larijani said, adding the US is after a "new adventurism" through its decision to declare Jerusalem al-Quds as the so-called capital of Israel.

"What motivations did the Americans have in their plan to move their embassy to al-Quds? Everyone saw that the whole world reacted to this decision," he said.

Larijani said the US today has turned into "a symbol of an evil state."

"The issue of terrorism in Iraq and Syria has not been resolved yet and the Americans have stirred the issue of Palestine. The people of the world and the Palestinians will certainly not remain silent on this measure and start a new intifada."