TEHRAN, December 25 - Iranian Parliament Speaker Ali Larijani says the United States is not sincere in its campaign against terrorism, adding that Washington is only "playing games." 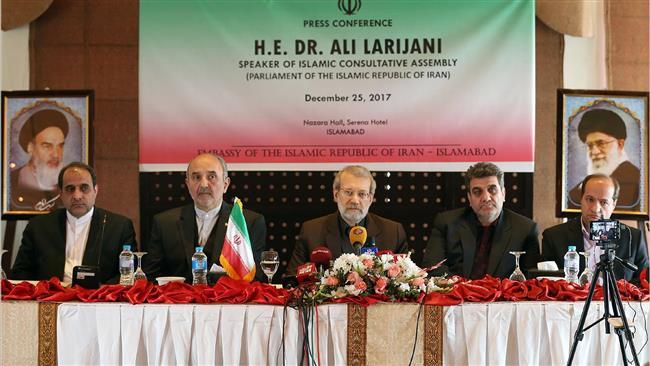 TEHRAN, Young Journalists Club (YJC) - Larijani made the remarks while speaking to reporters in the Pakistani capital of Islamabad on Monday on the sidelines of a conference on the challenge of terrorism and inter-regional connectivity.

He said the Islamic Republic condemned terrorism in all its forms and emphasized that the US had created terrorist groups, including Daesh, to destroy the resources of Muslim countries and serve the Israeli regime's interests.

"Iran opposes any act of terrorism in all its forms and shapes whether in Pakistan, Afghanistan, Syria or Iraq and regards it as tyranny against Muslims," the top Iranian parliamentarian official pointed out.

Larijani said the US attacked Afghanistan in 2001 under the pretext of fighting terrorism and the cultivation of narcotics, but the production of drugs has increased by more than 45 percent in the war-stricken country.

There are some 400 laboratories in Afghanistan, which are producing heroin, he said, criticizing NATO's inaction in this regard.

A recent survey by the United Nations and the Afghan government revealed that opium production in the restive country had almost doubled in 2017 compared to the previous year.

According to the survey issued in November by the Afghan Ministry of Counter Narcotics and the UN Office on Drugs and Crime (UNODC), the opium production has risen by 87 percent and stands at a record level of 9,000 metric tons (9,921 US tons) so far this year, compared to 4,800 metric tons (5,291 US tons) in 2016.

Afghanistan is the world's top cultivator of poppy, from which opium is produced. The Taliban militants are heavily involved in the poppy cultivation and opium distribution especially in areas under their control.

More than 16 years after a US-led invasion of Afghanistan, security remains fragile. The US-led forces transferred security responsibilities to Afghan forces in 2014, although some 13,000 NATO soldiers, most of them from the US, are still stationed in Afghanistan.

The Taliban, which ruled the country before the 2001 invasion, are reportedly overrunning territory in the south and north.

US President Donald Trump has allowed the deployment of another 4,000 US troops in Afghanistan and has repeatedly urged other NATO members to contribute more.