TEHRAN, December 26 - The Israeli Interior Ministry has announced that it will be deporting two of the three Turkish nationals that were arrested last week during protests against the US move to recognize Jerusalem al-Quds as the Israeli capital. 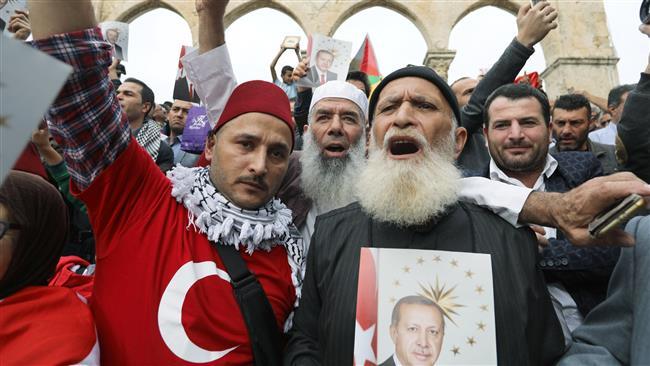 TEHRAN, Young Journalists Club (YJC) - On Monday, an Interior Ministry spokeswoman said one of the men would be deported on Monday and another on Saturday, adding that both had entered Israel on Belgian passports.

She noted that she had no information concerning the third Turkish national who had been arrested.

A video circulating on social media shows a number of men in red shirts with the Turkish flag clashing with police forces in the occupied Old City.

According to Turkey's state-run news agency Anadolu, two of the arrested individuals, who had dual Turkish and Belgium citizenship, were arrested for "assaulting Israeli police and resisting police" while the third man was accused of "disturbing public order and taking part in an illegal demonstration."

Turkey has adopted a tough stance against the US decision on Jerusalem al-Quds.

Turkish President Recep Tayyip Erdogan pledged on December 10 that Ankara would not abandon the Palestinian city to the mercy of a regime “that kills children."