TEHRAN, December 26 -Reactions were mostly volatile after US President Donald Trump retweeted an image that appeared to contain a blood splat over the CNN logo. The image is accompanied by the caption: “Winning.” 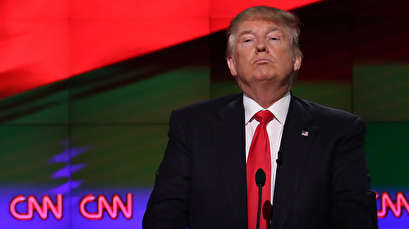 TEHRAN, Young Journalists Club (YJC) -Reactions were mostly volatile after US President Donald Trump retweeted an image that appeared to contain a blood splat over the CNN logo. The image is accompanied by the caption: “Winning.”

Social media exploded on Christmas Eve after Trump, coming on the heels of a tweet in which he bashed the FBI deputy director, retweeted an image of himself lounging in the backseat of a car talking on the phone. On the bottom of the shoe of his crossed leg is a bloody splat accompanied by the CNN logo. A pair of cartoonish bug eyes above the logo completes the picture.

The doctored photo was originally shared on Saturday by a Twitter account “oregon4TRUMP” after Trump had tweeted his presidential accomplishments from his first year in office.

“The Stock Market is setting record after record and unemployment is at a 17 year low,” Trump tweeted proudly on Saturday. “So many things accomplished by the Trump Administration, perhaps more than any other President in first year. Sadly, will never be reported correctly by the Fake News Media!”

In response to Trump’s retweet of the squashed CNN logo, CNN anchor Jake Tapper, who takes issue with the Republican leader on a regular basis, noted via Twitter: “CNN-labeled blood on the sole of his shoe. Retweeted by the President of the United States on Christmas Eve.”

Jason Osborne, a former adviser for the Trump campaign, responded to Tapper by claiming the image on the bottom of Trump’s shoe resembled a squashed bug, while advising the CNN anchor not to “make everything about your network.”

Tapper replied: "The president retweeted an image of blood labeled 'CNN' on the sole of his shoe. I noted it. Trump Adviser now faults *me* for 'making this about' CNN. God bless us, everyone."

Other commentators noted that the president’s retweet was made on Christmas Eve, which apparently made the post much less acceptable.

“The President retweeting this on Christmas Eve, w/blood on his shoe representing CNN. White Evangelical Christians: is this the kind of leader that represents Jesus message of love and the hope of Bethlehem?”

Even John Aravosis, who tweeted the original post of the stamped-out CNN logo, seems to have released his tweet more as a piece of sarcasm than any sort of endorsement for the US leader.

“It took all of 15 seconds to confirm that it says ‘CNN.’ But you’re right: A guy who embraces pedophiles, and actual Nazis, would never knowingly retweet a call for violence against the media; THAT’S where he draws the line,” Aravosis tweeted.

CNN has come under increasing attack, not just from Trump, but from many regular Americans who, following the president, now refer to the channel as “fake news.”

Trump supporters point to the cable news channel’s reluctance to report positive news on the Republican leader, while supporting the narrative that Trump somehow conspired with the Russians to steal the 2016 presidential election from Hillary Clinton.