TEHRAN, December 27 - The Lebanese and Palestinian resistance movements, Hezbollah and Hamas, are setting up a joint body to stand up to US President Donald Trump’s contentious decision on Jerusalem al-Quds, an informed source said. 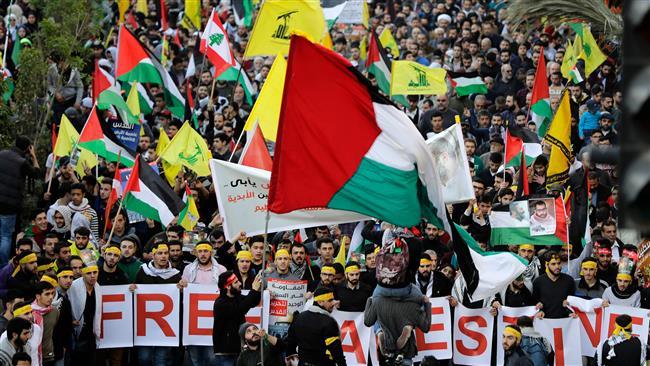 The command, he said, would gather representatives from Hezbollah and Hamas as well as Iraq's Popular Mobilization Units (PMU), also known by its Arabic name Hashd al-Sha’abi, and other resistance groups in the Gaza Strip and the West Bank.

“There could be an official announcement soon from the axis of resistance that it is coming together to confront Israel and Trump’s decision,” the source added.

On December 6, US President Donald Trump declared that Washington was recognizing Jerusalem al-Quds as the “capital” of Israel and planning to relocate the American embassy from Tel Aviv to the holy city.

The dramatic shift in Washington’s Jerusalem al-Quds policy drew fierce criticism from the international community, including Washington’s Western allies, and triggered protests against the US and Israel worldwide.

On December 11, Hezbollah Secretary General Sayyed Hassan said that Trump's move had made the US and White House isolated in the world.

Hamas has said Jerusalem al-Quds is the “eternal capital” of the state of Palestine, and that American or Israeli decisions cannot change this fixed reality.

It has also said Israel has “no land” and naturally no right to designate “a capital” city, calling for a new Palestinian intifada (uprising) against the occupying regime in Tel Aviv.

Over the past week, the occupied West Bank and Gaza Strip has been the scene of angry demonstration and clashes. A total of 12 Palestinians have been killed so far by Israeli forces amid the violence.