TEHRAN, December 27 - The Ukrainian government and pro-Russia forces have started the largest prisoner swap since a conflict broke out in the country’s east in 2014. 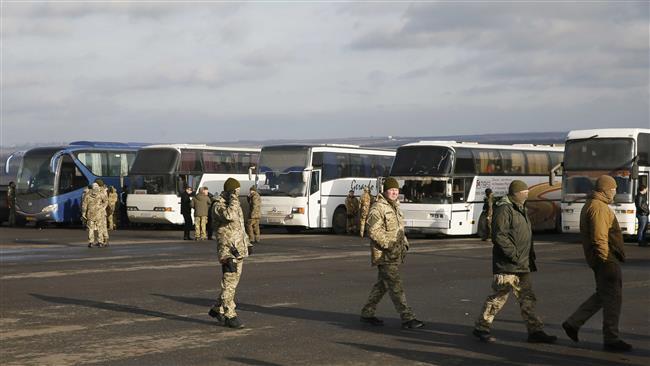 Pro-Russia forces bused 16 prisoners to a government-controlled area near the no-man’s land on the front, while Ukrainian government representatives delivered 99 people, the Associated Press reported.

A report by AFP, however, said 15 people were driven by bus to Ukraine-controlled territory.

More people were expected to be exchanged in another location later on Wednesday.

The swap on the eve of the New Year was agreed following negotiations involving Russian President Vladimir Putin, his Ukrainian counterpart Petro Poroshenko, as well as the head of the Russian Orthodox Church.

Under the terms of the deal, Ukraine will hand over 306 prisoners to pro-Russia forces and receive 74 prisoners in return, the Interfax news agency reported.

The prisoner swap is a key part of the 2015 Minsk II agreement aimed at ending the conflict in eastern Ukraine.

The last prisoner swap took place in September 2016 when two pro-Kiev forces were exchanged for four pro-Russia fighters at a checkpoint outside the city of Lugansk.

A series of truce deals has helped lower the level of violence but sporadic fighting has occurred, with the parties blaming each other for initiating the violations.

Ukraine and its Western allies accuse Russia of having a major hand in the conflict, an allegation denied by Moscow.

The simmering conflict in the east of the former Soviet republic has killed more than 10,000 since 2014.