TEHRAN, December 28 - The ongoing Saudi aggression on Yemen has been escalated in December, marking a stunning death toll in the impoverished Arab country. 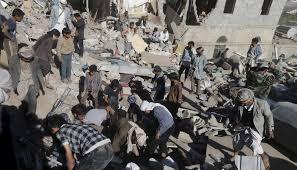 TEHRAN, Young Journalists Club (YJC) - 600 martyrs or wounded were claimed by the Saudi-led aggression on Yemen in 26 days in December, according to a report broadcast by the local TV Channel Al-Massira.

The report mentioned that 400 Yemenis were either martyred or injured by the Saudi-led aggression in the second half of December and that the air raids struck all the kinds of civil and military targets in the various Yemeni provinces.

Yemen has been since March 26, 2015 under brutal aggression by Saudi-led coalition.

Thousands have been martyred and injured in the attack, with the vast majority of them are civilians.

Riyadh launched the attack on Yemen in a bid to restore power to fugitive ex-president Abd Rabbu Mansour Hadi who is a close ally to Saudi Arabia.