Reuters journalists jailed by Myanmar may have been victims of set-up, families indicate

TEHRAN, December 29 -Two Reuters journalists jailed in Myanmar for obtaining “important secret papers” were arrested just after being handed rolled papers by police officials in a restaurant to which they had been invited for dinner, their family members say. 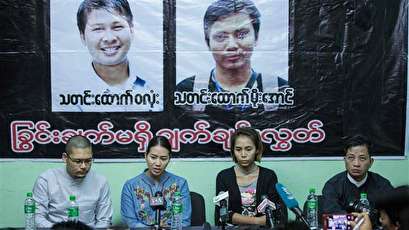 TEHRAN, Young Journalists Club (YJC) -Two Reuters journalists jailed in Myanmar for obtaining “important secret papers” were arrested just after being handed rolled papers by police officials in a restaurant to which they had been invited for dinner, their family members say.

The journalists, Wa Lone and Kyaw Soe Oo, who worked on Reuters coverage of ongoing state-sponsored violence against Rohingya Muslims in the western state of Rakhine, were arrested on December 12 during a meeting with two police officials over dinner.

Authorities said they were “arrested for possessing important and secret government documents related to Rakhine State and security forces.”

Speaking at a news conference on Thursday, the family members of the two, who met the detainees in prison a day earlier, suggested that police may have fabricated a case for arresting them.

Wa Lone’s wife, Pan Ei Mon, said her husband told her that he and Kyaw Soe Oo had a meeting at a restaurant with two police officers they had not met before.

“They took the two rolled papers and paid the bill and went out from the restaurant,” she said. “They were immediately grabbed by around seven or eight policemen who handcuffed them and arrested them. He told me that.”

“Wa Lone and [the] other [journalist] didn’t know what was inside the paper,” she said.

Nyo Nyo Aye, Kyaw Soe Oo’s sister, also said that her brother had given her a similar account of the incident. “As he didn’t commit any crime, he believes he will be released soon,” she said.

The journalists, however, were remanded in custody for another 14 days at the request of police on Wednesday.

The two, who had been held in a police compound for the past 16 days, were taken to Yangon’s Insein prison later, a notorious jail that was once run by Myanmar’s former junta.

Meanwhile, some 100 journalists, lawyers, and farmers took to the streets in the town of Pyay, north of Yangon, to demand the release of the two journalists.

Myanmar’s government has said the policemen who met with the reporters have also also arrested, but it has not provided any further information about them.

The officers had reportedly worked in Rakhine State, where the military, over the past three months, has engaged in rapings, killings, arbitrary arrests, and mass arson attacks to destroy houses in predominantly-Rohingya villages.

Rohingya people, who according to the UN are “the world’s most persecuted minority,” have been subject to state-sponsored violence since late last year. A crackdown accompanied by a military siege has been ongoing since then. That violence intensified on August 24, and more than 655,000 Rohingya people have fled the violence to Bangladesh ever since.

More than 6,700 Rohingya Muslims have also been killed in the month after the crackdown intensified in late August, according to aid agency Doctors Without Borders.

United Nations Special Rapporteur Yanghee Lee, who has been denied access by the Myanmarese government to the country, also criticized Myanmar’s crackdown on the media. She said the authorities were creating “a national gag” that would prevent journalist from reporting what they see.

“That will have consequences on the general public too; people will not be able to speak as freely,” Lee said on Thursday.

Lee had been due to visit the Southeast Asian country in January to assess the human rights situation there, including widespread abuses against the Rohingya Muslims. She has said that Myanmar’s non-cooperation indicates that it has something “terribly awful” to hide in Rakhine.