TEHRAN, December 29 - Fresh clashes have broken out between Palestinian protesters and Israeli forces across the West Bank over US President Donald Trump’s decision to recognize Jerusalem al-Quds as the Israeli “capital” in defiance of international condemnations. 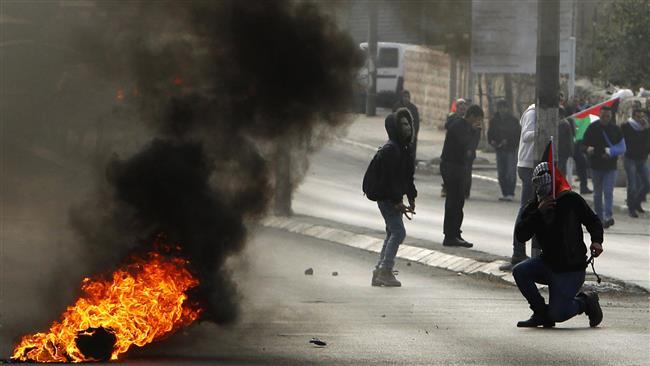 Clashes were reported between Palestinian protesters and Israeli forces at the northern entrance to the eastern city of Ariha.

Similiar skirmishes broke out between anti-Trump protesters and Israeli forces in Beit Ummar town, northwest of al-Khalil, during which a Palestinian youth sustained serious injuries.

Meanwhile, Israeli sources claimed that the Tel Aviv regime’s forces had been able to intercept a number of rockets fired from Gaza at Sdot Negev and Sha’ar HaNegev regions amid the clashes.

The sources confirmed that a building was completely destroyed.

Tel Aviv usually uses such alleged incidents to step up its attacks against the besieged Gaza Strip.

Later, the United Nations General Assembly overwhelmingly voted in favor of a resolution that calls on the US to withdraw its controversial recognition of Jerusalem al-Quds as Israeli “capital.”