TEHRAN, December 29 - CNN in a report has addressed lack of Trump’s knowledge on weather changes. 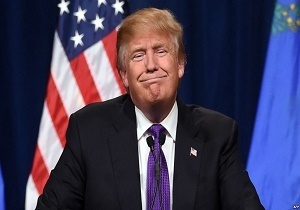 TEHRAN, Young Journalists Club (YJC) - At 8 p.m. Thursday, after a third straight day of golf at his Mar-a-Lago resort in Palm Beach, Florida, and the temperature was 72 degrees, US President Donald Trump tweeted this:

"In the East, it could be the COLDEST New Year's Eve on record. Perhaps we could use a little bit of that good old Global Warming that our Country, but not other countries, was going to pay TRILLIONS OF DOLLARS to protect against. Bundle up!"

The "logic" at work here is simple: How can climate change, aka global warming, be real if it is so cold outside?

It's the same sort of "logic" that led Oklahoma Sen. Jim Inhofe (R) to bring a snowball onto the Senate floor in late February 2015 as a supposed counterweight to claims of global warming.

Toting his snowball in one hand, Inhofe, who was the chairman of the Environment and Public Works Committee at the time, said:

"In case we have forgotten, because we keep hearing that 2014 has been the warmest year on record, I asked the chair, do you know what this is? It's a snowball just from outside here. So it's very, very cold out. Very unseasonable."

What Trump (and Inhofe) don't seem to understand -- or choose to ignore -- is that "weather" and "climate" are not the same thing.

Here's a brief primer on the difference between the two, via NASA: "Weather is what conditions of the atmosphere are over a short period of time, and climate is how the atmosphere 'behaves' over relatively long periods of time."

That it is cold on any given day -- or week! or month! -- is not indicative of much of anything about the climate and whether it is warming or not. If the "weather = climate" logic held, a series of sweltering summer days could reasonably be concluded as incontrovertible evidence that the planet is getting warmer.

You get the idea. All available evidence -- and there are 137 years of it! -- makes very, very, abundantly clear that the climate is changing. There's also this bit of fact: 97% of climate scientists who have published papers on climate change believe not only that the globe is warming but also that the warming is very likely due to human activity.

Trump is free to tweet whatever he likes. And he will continue to do so. But to use cold weather as some sort of rebuttal of broader climatological warming is not even close to accurate, factual or funny.

Share to
Related News
Out of this world: NASA captures stunning snap of colorful Crab Nebula
Hanging Up the Gloves: Longest Serving Republican in US Senate Retires
Tags
Trump ، weather ، climate
Your Comment