TEHRAN, December 29 - A political commentator based in London denounced the Bahraini regime’s recent move to issue death sentences against six dissidents in a military court and said the courts’ adherence to “international human rights law is questionable at best”. 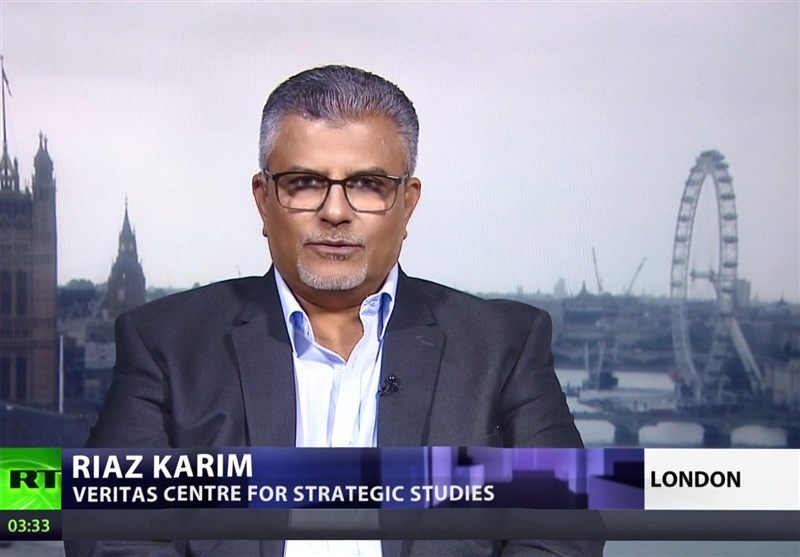 TEHRAN, Young Journalists Club (YJC) - “The Bahraini military’s judiciary is prosecuting civilians for simply exercising their right to freedom of expression and peaceful assembly,” Riaz Karim, the director and co-founder of the Mona Relief Organization, said in an interview with the Tasnim News Agency.

“These military courts are specifically employed to punish those in the opposition and their conformity with international human rights law is questionable at best,” he noted.

Dr. Riaz Karim holds a Ph.D. from Harvard University. He is also the Director of Veritas Centre for Strategic Studies in London. He is also an analyst and commentator for a number of media outlets around the world.

Tasnim: The Bahraini regime sentenced six citizens to death in a military court on charges of attempting to assassinate the Commander-in-Chief of Bahrain Defense Force (BDF) and carrying out terror attacks. What is your take on the death sentences?

Karim: The Bahraini military’s judiciary is prosecuting civilians for simply exercising their right to freedom of expression and peaceful assembly. All the defendants have been subjected to torture and solitary confinement. Since 2011, military courts in Bahrain have tried hundreds of defendants. These military courts are specifically employed “to punish those in the opposition” and their conformity with international human rights law is questionable at best. The six are alleged to have plotted against the life of Field Marshal Sheikh Khalifa bin Ahmed Al-Khalifa, who is a member of the ruling family, but they do not give any further details of when or where the plot is said to have taken place. Human rights watchdogs say that counter-terrorism legislation in Bahrain has been abused to prosecute peaceful opposition figures and it is common practice in the repressive regime of Bahrain. One cannot expect anything less from a Saudi Arabia style repressive regime except label any opposition as dissent and remove it out of the way.

Tasnim: As you may know, the Bahraini regime forces, in a recent politically motivated move, have extensively surrounded the house of Sheikh Isa Qassim, the spiritual leader of the country’s Shiite majority, in Diraz, west of Manama. The move came as the health condition of the top Shiite cleric has deteriorated, according to a statement from the UK-based Bahrain Institute for Rights and Democracy (BIRD). Sheikh Qassim needs to undergo an emergency medical operation, the statement said. What is your assessment of the developments?

Karim: Although report gathering has become very difficult from Diraz off lately, especially after reporters are being refused accreditation by the repressive regime of Bahrain, at this point, the regime is holding a double-edged sword on Sheikh Issa Qassim. On one edge lies his fear of deportation after his nationality was revoked and on the second edge is house arrest coupled with his deteriorating health. So in essence, if his deteriorating health does not take his life first then the fallback is to deport him. Critics of the government are often accused of serving “foreign interests”. That usually means Iran, which officials say fomented the uprising in 2011. The claim has been debunked; but it wins support in the region especially from Saudi Arabia, UAE, Kuwait and other allies in the region. Ayatollah Qassim is accused of having ties to foreign powers.

In spite of pressure from various quarters, the repressive regime of Bahrain will not change its stance because of the insecurities the Al Khalifa has about their monarchy and because of the support from allies especially the Saudi Arabia. This is more like a case of "Monkey see Monkey do" because their main ally in the region does the very same thing to its Shiite population.

Tasnim: The people of the Persian Gulf country have staged demonstrations on various occasions in support of Sheikh Qassim and condemned the continued house arrest of the top cleric. In your opinion, can such protests pressure the Al Khalifa regime to lift the house arrest? What role could international human right bodies play in the incidents?

Karim: The question should be ‘does the Saudi Arabian regime yield to international pressure?’ and you will have the answer. On the contrary, it defies all international pressure and so does Bahrain. When countries like the US and Great Britain have their military bases there and you have assurance from leaders like Donald Trump, Theresa May, and Mohammed Bin Salman, it gives the Al Khalifa regime an Invincible Armor, specially now that they have started dialogue with Israel and delegations from Bahrain have visited Israel under the interfaith banner whereas it is a known fact that Trump advisers are working on normalizing relations between Israel and Bahrain. So to answer the question, it is going to take a lot more than international human rights bodies to make the Bahrain regime take notice or change any of their oppressive edicts.

Tasnim: Do not you think that the Saudi lobby in Bahrain is behind such moves against Sheikh Qassim?

Karim: Without a doubt, there is no question that they are responsible for fanning the fires of oppression on the Shiite population, after all, it is a common practice in Saudi Arabia and they have achieved a degree of success in doing so. We have to remember that the "Politics of Fear" are not always between regimes and citizens they also play a huge part between countries. The Al Khalifa regime is constantly reminded that if they do not rule with an iron fist their dynasty would come to an end and that puts the fear of God in them. It is common practice to neutralize the leaders of the opposition in order to keep yourself safe and Sheikh Issa Qassim is the victim of an autocratic hardline regime, which is run by the politics of fear.