TEHRAN, December 30 - One of eight former Turkish servicemen, who had fled to Greece after participating in the last year defeated coup, has been granted asylum on Saturday. 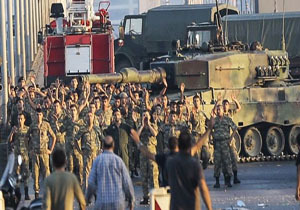 TEHRAN, Young Journalists Club (YJC) - According to a ruling by the 3rd Independent Secondary Asylum Committee, the asylum was granted to Suleyman Ozkaynakci, the copilot of the helicopter, which the eight Turkish officers used to flee their country.

The Committee ruled that it cannot be proved that the copilot took part in the defeated coup.

The rest of the officers have not yet been granted asylum and are currently held by the Greek authorities, expecting the Committee’s next rulings.

The officers had arrived in Alexandroupolis, Greece in a Turkish military helicopter hours after the defeated coup in July 15, 2016.

On Jan. 26, 2017, the Greek Supreme Court decided not to extradite the officers to Turkey. Turkish Foreign Ministry called the decision “politically motivated”.

The issue was debated between the Turkish President and the Greek Prime Minister, during Recep Tayyip Erdogan’s official visit to Greece on Dec. 7, 2017.

Ankara also accuses FETO of being behind a long-running campaign to overthrow the state through the infiltration of Turkish institutions, particularly the military, police, and judiciary.