TEHRAN, December 30 - An Egyptian court convicted former President Mohammed Morsi and 19 others on Saturday of insulting the judiciary, sentencing them to three years in prison in a court session aired on TV. 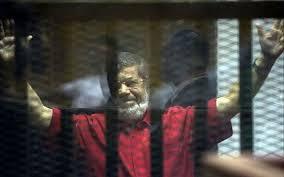 TEHRAN, Young Journalists Club (YJC) - The case involves 25 defendants, five of whom — including prominent rights activist Alaa Abdel-Fattah and political commentator Amr Hamzawy — were fined 30,000 Egyptian pounds each ($1,688). Abdel-Fattah is serving a five-year sentence for participating in an illegal protest in 2013. Hamzawy lives in exile.

All the defendants are accused of insulting the judiciary by making statements that were made public either on TV, radio, social media or in publications that the court found to be inciting and expressing contempt toward the court and the judiciary.

The court ordered Morsi to pay 1 million Egyptian pounds ($56,270) as compensation to one of the judges.

It also ordered 23 of the defendants, including Morsi, to pay 1 million Egyptian pounds each to a powerful union of judges known as the "Judges Club," state-run Al-Ahram newspaper reported.

Also on Saturday, another court sentenced prominent activist and rights lawyer Mahinour el-Masry to two years in prison over participating in an illegal protest against the government's transfer of two strategic Red Sea islands to Saudi Arabia, lawyer Taher Aboelnasr said. The 2016 deal between the two countries sparked rare protests in Egypt.

The case involved five people. El-Masry and another activist, Moatassem Medhat, received two-year sentences while three others were given three-year sentences in absentia, Aboelnasr added.

All the verdicts can be appealed.

El-Masry, 31, is widely known for her activism in many labor movements, and on behalf of Syrian and Palestinian refugees in Egypt. She has been outspoken on the rights of detainees and political prisoners.

Along with Abdel-Fattah, El-Masry was also a prominent activist during the country's 2011 uprising that toppled longtime ruler Hosni Mubarak.

Abdel-Fattah is an outspoken blogger who has been in and out of prison in the years since Mubarak's ouster.

He was detained during Mubarak's rule for 45 days. A software engineer by profession, he also campaigned against the policies of the military council that ruled Egypt for nearly 17 months following Mubarak's ouster.

Since his ouster, Morsi has since faced trial on a host of charges, including espionage and conspiring with foreign groups.