TEHRAN, December 31 -Catalonia’s former leader, Carles Puigdemont, has urged Spain to reinstate the secessionist government that he headed but that was dismissed following an illegal independence referendum. 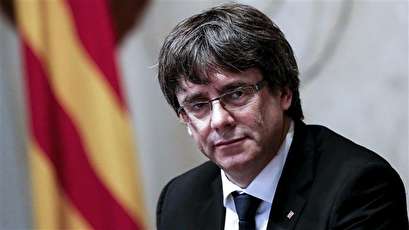 TEHRAN, Young Journalists Club (YJC) -Catalonia’s former leader, Carles Puigdemont, has urged Spain to reinstate the secessionist government that he headed but that was dismissed following an illegal independence referendum.

Spanish Prime Minister Mariano Rajoy dismissed the former regional government of Catalonia — an autonomous region of Spain — and called for snap elections to be held on December 21, aiming to marginalize the secessionist camp that favored a split of the wealthy northeastern region from Spain.

Pro-independence parties, however, won 70 of the 135 seats in the Catalan parliament in those elections, giving secessionist lawmakers a slim majority over the pro-unity camp.

Spain should “recognize the election results of December 21 and start negotiating politically with the legitimate government of Catalonia,” Puigdemont said in video circulated via social media from Brussels on Saturday, referring to his former government.

“The ballot boxes have spoken; democracy has spoken; everyone has been able to express themselves. What is Rajoy waiting for in order to accept the results?” he said.

Puigdemont said if Spain called itself a democracy, it had to accept his “legitimate government.”

Former pro-independence officials remain either in jail or exile over their role in organizing the referendum on the separation of Catalonia from Spain on October 1.

Puigdemont fled to Brussels after being sacked by Rajoy. Madrid issued but then withdrew a European arrest warrant for him.

Rajoy, on Friday, called for the Catalan parliament to be formed on January 17.

He said, however, that it was “absurd” that the dismissed Catalan leader wanted to govern Catalonia from exile.