TEHRAN, December 31 - Thousands in Tel Aviv, Haifa, and Jerusalem al-Quds walked out on Saturday, protesting against corruption of Netanyahu’s cabinet. 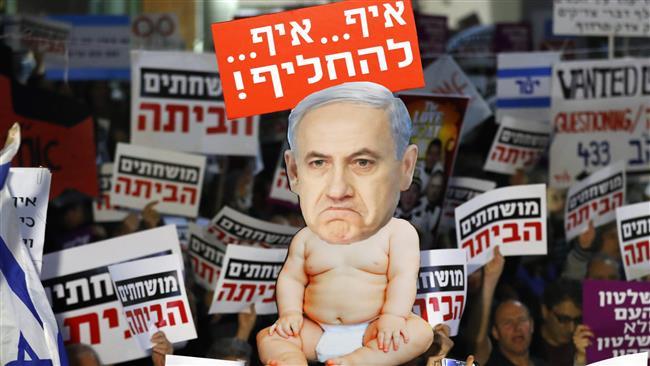 TEHRAN, Young Journalists Club (YJC) - Carrying placards read “Crime Minister” (instead of Prime Minister), the protesters called for the resignation of Netanyahu and his cabinet.

The Likud party (Netanyahu’s party which is the ruling party), issuing a statement condemning the demonstration, claimed that the political leftist movement in Israel is engaged in dividing the regime.

It is the fifth consecutive week that Israelis protest against Netanyahu for his corruption scandals.

The Israeli premier is suspected of being involved in bribery, fraud and breach of trust.

He has been questioned in two separate cases, involving allegations that he received lavish gifts from wealthy businessmen and negotiated a deal with a newspaper owner for more favorable coverage. He has denied any wrongdoing.

Another scandal, called the “submarine affair,” also involves Netanyahu associates. The scandal revolves around the allegations of bribery in a deal between Israel and Germany worth over a billion dollars.