TEHRAN, December 31 -The United Nations (UN)’s Secretary General Antonio Guterres has issued “a red alert for the world” ahead of the year 2018. 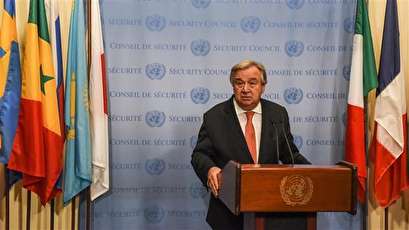 TEHRAN, Young Journalists Club (YJC) -The United Nations (UN)’s Secretary General Antonio Guterres has issued “a red alert for the world” ahead of the year 2018.

In his New Year message on Sunday, Guterres warned about the growing threat of nuclear war and climate change as well as other types of imminent conflicts.

“I am issuing an alert — a red alert for our world,” he said, alarmingly. “Conflicts have deepened and new dangers have emerged. Global anxieties about nuclear weapons are the highest since the Cold War.”

There are all-out armed conflicts going on in several parts of the world, including in Yemen, where Saudi Arabia has been waging a devastating war since 2015. In Syria, militants backed by foreign governments have been fighting the Syrian government. And the government in Ukraine is fighting pro-Russia forces in the east of the country. Civil wars and militancy also plague parts of Africa.

But the most imminent threat is perceived to be from an escalating dispute between the United States and North Korea. The US is opposed to the North’s weapons programs, which Pyongyang has been developing to counter perceived threats from America and its allies. Each has threatened the other with military action, including nuclear attacks.

Guterres also voiced concern about climate change, a major concern among world countries that they attempted to tackle with a climate deal in 2016. The US, under President Donald Trump, has initiated a withdrawal from that pact, which has been endorsed by over 190 other states and parties.

“Climate change is moving faster than we are,” Guterres warned.

“Inequalities are growing. We see horrific violations of human rights. Nationalism and xenophobia are on the rise.”

The UN chief said the international community needed to unite in the face of such challenges. “We can settle conflicts, overcome hatred, and defend shared values. But we can only do that together.”

He said he would appeal to the international community for the year 2018 to be a “year for unity” in tackling global issues and crises. “Unity is the path… our future depends on it.”

“Narrow the gaps. Bridge the divides. Rebuild trust by bringing people together around common goals,” he said addressing leaders around the world.