TEHRAN, December 31 -Labour leader Jeremy Corbyn says his party will occupy “new center ground” in the UK because the Conservative Party is “finished.” 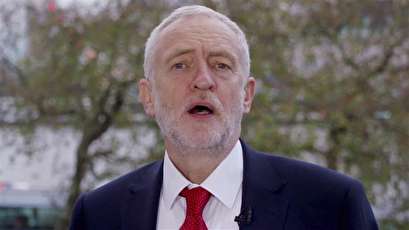 In his New Year message, Corbyn said that “we are being held back by a self-serving elite, who look after themselves and their friends and a failed system which delivers staggering wealth at the top, while more and more people struggle to simply make ends meet."

"The old political consensus is finished. We are staking out the new center ground in British politics, backing the things which most people want but are blocked by vested interests," he said in his message released on New Year’s Eve.

Corbyn wants to lead his party into the 2022 general election as British Prime Minister Theresa May’s popularity is declining over Brexit.

May is currently under pressure to provide a meaningful plan for the UK’s withdrawal from the European Union (EU), something she has failed to do more than a year after 52 percent of Britons voted in favor of Brexit in a referendum.

Corbyn is trying to make the best out of May’s failures and is getting more serious about replacing her.

In his message, he said “we are a government in waiting, while the Conservatives are weak and divided and stuck in an outdated rut.”

He said May and her party had “no idea” how to fix the “broken system or upgrade our stagnant economy.”

Meanwhile, May, in her New Year message, said that 2018 would bring “renewed confidence and pride” to Britain while hailing the “good progress” made in the Brexit talks.

EU leaders have been increasingly frustrated about divisions in May's cabinet over Brexit, saying they were still unsure what the UK wanted, even after five rounds of negotiations.