TEHRAN, December 31 -North Korea has released stamps celebrating the recent launch of the Hwasong-15 ICBM, which it claims is capable of hitting the US mainland. Apart from the missile, the stamps show the North Korean leader overseeing the test. 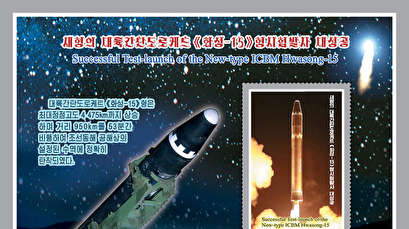 TEHRAN, Young Journalists Club (YJC) -North Korea has released stamps celebrating the recent launch of the Hwasong-15 ICBM, which it claims is capable of hitting the US mainland. Apart from the missile, the stamps show the North Korean leader overseeing the test.

North Korea fired the Hwasong-15 intercontinental ballistic missile (ICBM), which splashed down in the Sea of Japan, in late November. Pyongyang claims the missile reached an altitude of 4,475 kilometers and flew 950 kilometers during its flight, which lasted 53 minutes. The stamps marking the launch were issued by the State Stamp Bureau of North Korea, KCNA state news agency reported on Saturday.

The words on the stamps read: “Accomplishment of the historic cause of completing the state nuclear force” and “Successful test-launch of new-type ICBM Hwasong-15.” The stamps show the Hwasong-15 “soaring into the sky,” as well as the 9-axis self-propelled launcher “manufactured by the Korean working class,” KCNA reports. The stamps also feature North Korean leader Kim Jong-un, who gives “an autographic order for the test-fire.”

North Korea says the Hwasong-15 is capable of striking anywhere on the US mainland. Perfecting the technology, as Pyongyang claims, is a major breakthrough that tilts the balance of power on the Korean Peninsula, potentially giving North Korea a nuclear deterrent against the United States. The apparent milestone came as a surprise for many Korea watchers, who expected Pyongyang to achieve it sometime after 2020. The other launches that took place in 2017 were of the shorter-range Hwasong-14 missile and the intermediate range (IRBM) Hwasong-12.

Leading world powers, including Russia, condemned the launch of the Hwasong-15. Kremlin spokesman Dmitry Peskov called it “a provocative act that triggers further escalation and moves us further away from crisis settlement.” “We do condemn the launch and hope all the parties will exercise restraint which is so much needed to prevent the situation in the Korean peninsula from going the worst way,” he added.

US President Donald Trump said the missile test is “a situation that we will handle,” and that it will not change his approach to the crisis on the Korean Peninsula. “I will only tell you that we will take care of it.”