TEHRAN, January 1 - An Iranian lawmaker stressed that the US is after making Iran insecure. 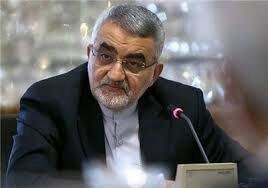 TEHRAN, Young Journalists Club (YJC) - “The policy of the US and Zionist regime is to put the world in chaos and insecurity,” said Alaeddin Boroujerdi, adding the parliament and government should do their best to control the issue.

Since Thursday, groups of Iranian protesters have held rallies in several cities to voice their anger over rising prices and economic conditions.

"This man who today in America wants to sympathize with our people has forgotten that a few months ago he called the Iranian nation terrorist," the Iranian president said, adding, "This person who is against the Iranian nation from head to toe has no right to feel sorry for the people of Iran," Presstv quoted him as saying.

Rouhani's remarks came after Trump took to Twitter to express support for the demonstrations in several Iranian cities, claiming that "the good people of Iran want change."