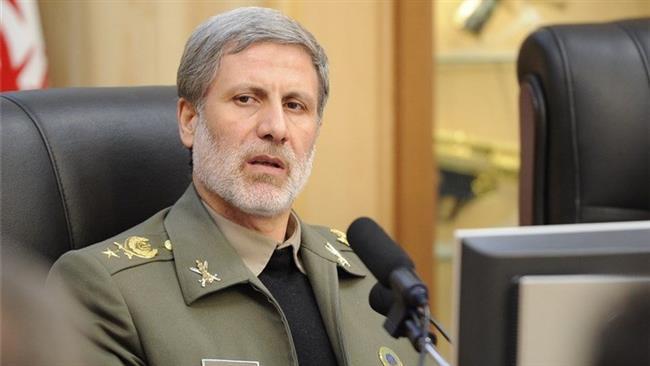 TEHRAN, Young Journalists Club (YJC) - Speaking at a meeting with the officials and experts of the Defense Ministry in Tehran on Monday, Brigadier General Hatami pointed to recent protests in various cities of the country and called on the Iranian people to foil the enemies’ plots against the country through national solidarity and unity.

At the current juncture, all of the sworn enemies of the Islamic Establishment are making every attempt to provoke the Iranian people and encourage them to create unrest, he said.

The minister went on to say that the global arrogance (the US) and other enemies of the country are dreaming up schemes to see “an insecure and unstable Iran”.

Some cities in Iran have been scenes of demonstrations in the past days after prices of several staples rose by up to 40 percent.

During the rallies, people called on the government to help control rising food prices and inflation, but some opportunists attempted to turn the situation ugly and materialize their vested interest at the cost of social security.

The US president also sided with the opportunists, tweeting, “…Iranian govt should respect their people’s rights, including right to express themselves. The world is watching!”

This is while according to Article 27 of the Iranian Constitution, “public gatherings and marches are allowed so long as the participants do not carry arms and are not in violation of the fundamental principles of Islam.”

Iranian officials maintain that peaceful protests are the right of every citizen as long as the rallies comply with the legal conditions.

Iranian President Hassan Rouhani began his second term in office in August, with the country’s economic issues high on his agenda.

Rouhani’s administration has managed to reduce the inflation rate, but it still faces many economic challenges.

Leader of the Islamic Revolution Ayatollah Seyed Ali Khamenei has said economic issues were the country’s top priority, urging Iranian officials to make relentless efforts to solve problems facing the people, including unemployment among the youth.

“Economy must be the top priority of all members and sectors of the government,” the Leader said in a meeting with President Rouhani and the members of his administration in August.

In a speech on Wednesday, Ayatollah Khamenei once again called on officials to pursue the Resistance Economy with determination in order to address “high prices, inflation and recession.”