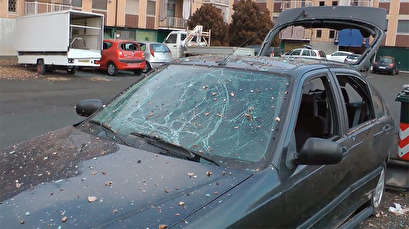 The city of Turin, known for its refined architecture and cuisine, celebrated the arrival of 2018 with a massive street festival, with thousands of partygoers gathering in Piazza San Carlo and Piazza Castello. Amid the festivities, some locals managed to sneak homemade pyrotechnics into the area despite a city-wide ban enforced by the local police.

At least four people were injured in La Falchera, on the northern outskirts of the city, after three homemade explosive devices went off in rubbish bins shortly after midnight in Via Delle Querce, La Stampa reported. Two Moroccans and two Italians were injured from the debris in the explosion. While none of the injuries are life-threatening, the blast was so powerful that it damaged four parked cars and shattered windows in about 30 surrounding houses, Italian media reported.

"I woke up, put my hand on my head and saw a lot of blood. I screamed in fright and my head hurt," one of the witnesses told RT's Ruptly video agency.

"Broken glass in the house, garage destroyed, even my neighbor suffered great damage," another local resident said. "All the windows were destroyed, from 29 to 37 (house numbers), glass houses, staircases of buildings, garages. Everything was destroyed, it was a really loud explosion."

Turin's carabinieri and military personnel immediately intervened, with firefighters also arriving at the scene. During the security operation in the area, which included a thorough sweep of the basements of the surrounding buildings, the security forces discovered an additional 12 unexploded homemade devices. Police also seized a 12-gauge cartridge and a 9x21-caliber cartridge, containing 546 grams of gunpowder. An investigation has been launched into the case. There are no reports that the incident is terrorist-related.