TEHRAN, January 2 -Venezuela’s state prosecutor says authorities have arrested a National Guard sergeant over the recent killing of a woman at a line for food. 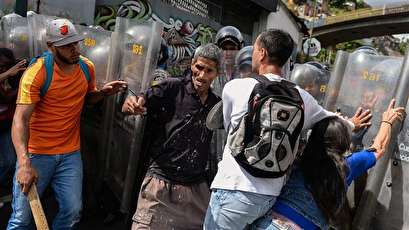 TEHRAN, Young Journalists Club (YJC) -Venezuela’s state prosecutor says authorities have arrested a National Guard sergeant over the recent killing of a woman at a line for food.

First Sergeant David Rebolledo was arrested over the shooting death of Alexandra Colopoy, according to a tweet by the Venezuelan state prosecutor, Tarek Saab, late Sunday night, Reuters reported.

The killing occurred when reserve soldiers were dispersing a crowd who had refused to leave a line for traditional Christmas meat in a poor area of Caracas after the supply had run out.

“The Venezuelan state guarantees the respect and application of human rights, as well as sanctions for those who violate them,” Saab tweeted.

Venezuela has faced shortages of certain food data-x-items in recent months. The country is reeling from a fourth year of recession, which Caracas links to foreign sanctions sabotaging its economy.

President Nicolas Maduro warned Venezuelans earlier this week that US President Donald Trump had launched an “economic war” against the country.

Last year, Venezuela also saw political violence, which left at least 125 people dead from both the government and opposition camps. Tensions spiked most recently when Venezuela’s Constituent Assembly said the opposition parties that had boycotted recent mayoral elections would have to reapply for legal status, potentially blocking them from presidential elections next year.