TEHRAN, January 2 - South Korea on Tuesday offered talks with North Korea, a day after North Korean leader Kim Jong Un said he was open to negotiations but that his country would push ahead with "mass producing" nuclear warheads. 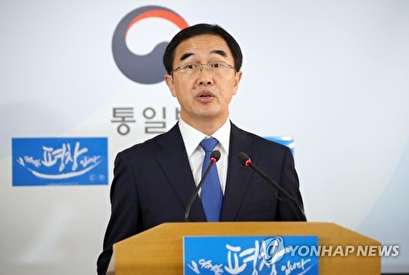 TEHRAN, Young Journalists Club (YJC) - The offer for high-level talks next Tuesday had been discussed with the United States, the South's unification minister said, while a decision on whether to push back a massive joint military drill between South Korea and the United States until after the Winter Olympics was pending.

"We look forward to candidly discussing interests from both sides face-to-face with North Korea along with the North's participation in the Pyeongchang Winter Olympics," Unification Minister Cho Myong-gyon told reporters.

"I repeat, the government is open to talking with North Korea, regardless of time, location and form."

Cho said he expects the dialogue at the border village of Panmunjom, if it happens, to be focused on North Korea's participation at the Olympics in February, but other issues would likely arise, including the decentralization of North Korea.

Should the talks be held on Jan. 9, it would be the first such dialogue since a vice-ministerial meeting in December 2015.

The offer landed after a New Year's Day speech by Kim who said he was "open to dialogue" with Seoul, and for North Korean athletes to possibly take part in the Winter Games, but he persistently declared North Korea a nuclear power.

After welcoming Kim's address, South Korean President Moon Jae-in had asked his government earlier in the day to move as quickly as possible to bring North Korea to the Olympics.

Chinese Foreign Ministry spokesman Geng Shuang said the recent positive comments from both sides about improving relations, and Kim's remarks about participating in the upcoming Olympics, were a "good thing".

"China welcomes and supports North Korea and South Korea taking earnest efforts to treat this as an opportunity to improve mutual relations, promote the alleviation of the situation on the Korean peninsula and realize denuclearization on the peninsula."