TEHRAN, January 3 - US Ambassador to the UN Nikki Haley says North Korea is possibly preparing for a new missile test, warning of “tougher measures” against the South Asian country. 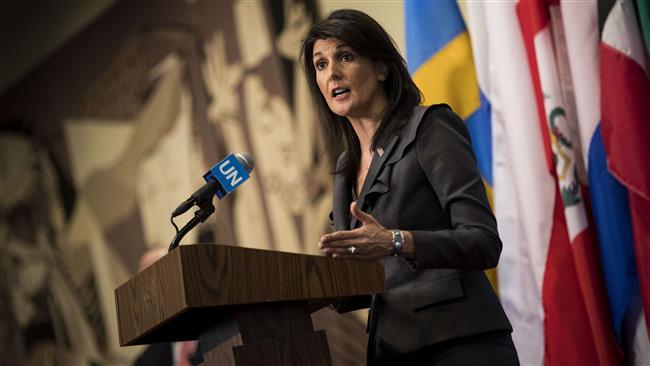 TEHRAN, Young Journalists Club (YJC) - “(W)e hear reports that North Korea might be preparing for another missile test,” Haley told reporters at the United Nations in New York on Tuesday.

“I hope that doesn’t happen. But if it does, we must bring even tougher measures to bear against the North Korean regime.”

Her remarks come as President Donald Trump on Tuesday made a sharp retort to the North Korean leader’s recent threat that he had a nuclear button on his desk, saying his nuclear button "is a much bigger & more powerful one than his.”

Kim Jong-un used his televised New Year’s Day speech to warn that "the entire United States is within range of our nuclear weapons, and a nuclear button is always on my desk. This is reality, not a threat."

But Kim said he was "open to dialogue” with South Korea. He said the Winter Olympics could provide a reason for officials from the two Koreas “to meet in the near future.”

Elsewhere in her remarks, Haley dismissed proposed high-level talks between North Korea and South Korea, saying it would not take any talks seriously unless Pyongyang abandons its nuclear weapons program.

Her dismissive assessment of the talks stands in contrast to the US State Department’s more cautious response.

The White House and the State Department denied that – in offering to send a delegation to South Korea for the Winter Olympics in February – Kim succeeded in driving a wedge between Washington and Seoul.

However, there was an obvious gap between Haley’s remarks and South Korea’s willingness expressed earlier on Tuesday to talk with the North “at any time and place, and in any form.”

South Korean Unification Minister Cho Myoung-gyon suggested the talks be held next week in the border village of Panmunjom, where they last held contacts two years ago.

Calling the North “a very reckless regime,” Haley said, “North Korea can talk with anyone they want but the US is not going to recognize it or acknowledge it until they agree to ban the nuclear weapons that they have.”

Pyongyang has repeatedly defended its weapons program as being defensive in nature and a deterrent against hostility by foreign powers.