TEHRAN, January 3 - Jordan, the custodian of Muslim holy sites in Jerusalem al-Quds, has condemned as “null and void” the latest Israeli measures meant to consolidate the regime’s occupation of the ancient city and annex more Palestinian territory. 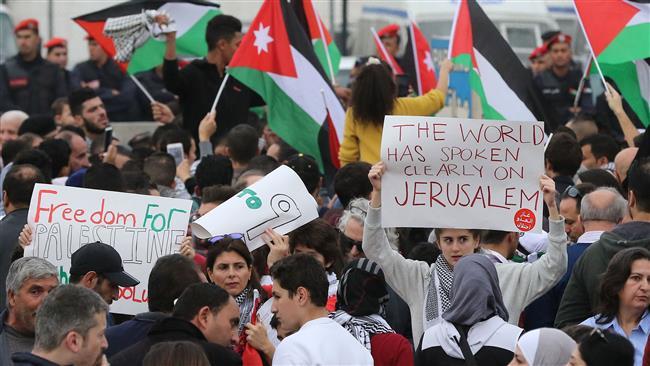 TEHRAN, Young Journalists Club (YJC) - In a post on his official Twitter account on Tuesday, Jordan’s Foreign Minister Ayman Safadi blasted the Israeli parliament (Knesset) for passing into law the so-called “United Jerusalem Bill” that makes it more difficult to cede parts of occupied Jerusalem al-Quds back to Palestinians.

He also denounced the ruling Israeli Likud Party’s recent vote in favor of a resolution seeking the annexation of large parts of the occupied West Bank.

“Israel continues 2adopt illegal unilateral decisions that deny region the peace it deserves & is in world interest,” he added.

The Israeli parliament endorsed the Jerusalem al-Quds bill in a 64-52 vote on Tuesday, raising the number of required votes from 61 to 80 in the 120-seat legislature before the regime can relinquish control over any portion of the holy city to a “foreign party.”

Over the weekend, the central committee of Prime Minister Benjamin Netanyahu’s Likud Party also voted for a non-binding resolution, asking Israeli law to be applied to “the freed settled expanses of the West Bank,” referring to the parts of the occupied land where the regime has built settlements in defiance of international law since 1967.

The measure also called for “unimpeded construction” there.

Additionally on Tuesday, Jordanian government spokesman Muhammad al-Momani stressed that East Jerusalem al-Quds is part of the “occupied territories” and its status must be decided upon through negotiations between Israelis and Palestinians in accordance with international law.

“We are warning Israel of the dangers of its recent actions, including the passing of the above-mentioned bill and the vote by Likud Party members regarding imposing Israeli sovereignty on West Bank settlements,” he said.

Momani also noted that such Israeli moves would undermine the so-called two-state solution to the decades-long Israeli-Palestinian conflict.

The recent Israeli decisions came less than a month after US President Donald Trump declared that Washington was recognizing Jerusalem al-Quds as the “capital” of Israel and planning to relocate the American embassy from Tel Aviv to the holy city.

The dramatic shift in Washington’s Jerusalem al-Quds policy drew fierce criticism from the international community and triggered protests against the US and Israel worldwide.

Israel lays claim to the whole Jerusalem al-Quds, but the international community views the ancient city’s eastern sector as occupied land and Palestinians consider it as the capital of their future state.