TEHRAN, January 4 -UN Secretary General Antonio Guterres has hailed the reopening of a hotline between North and South Korea, voicing hopes for further progress in defusing tensions on the Korean Peninsula. 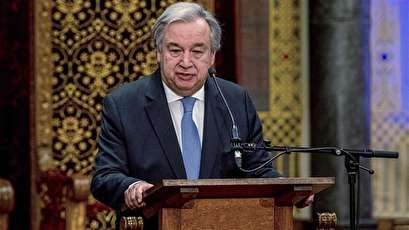 The UN chief "welcomes the reopening of the inter-Korean communication channel," added Haq.

The development came just after Seoul offered to hold talks with the North on January 9 to discuss "matters of mutual interest," such as the North's participation in the Winter Olympic Games.

The announcement came after Kim used his annual New Year address to express interest in dialog with the South as well as in North Korea's participation in the Winter Olympic Games, to be held in the South Korean city of Pyeongchang from February 9 to 25.

"We have noticed the positive information from the leaders of the two countries, and it is a good thing," he said.

"China welcomes and supports both countries to take the 2018 Winter Olympics as an opportunity to make effective efforts to improve their relations, relax the situation on the Korean Peninsula and promote the denuclearization of the peninsula," he added.

The two Koreas have seen tensions rise over Pyongyang’s nuclear and missile tests and Seoul’s joint military activities with the United States.

In recent months, North Korea has conducted multiple missile launches and its sixth and most powerful nuclear test. It has faced international sanctions over the test launches.